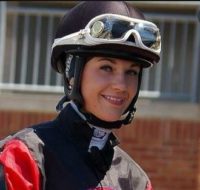 Woodbine jockey Skye Chernetz has something a little more meaningful she wants to give her mom Bonnie Eshelman this Sunday for Mother’s Day.

Skye is scheduled to ride five horses at Woodbine on Sunday and a victory would be the perfect gift for Bonnie, the first female jockey to win a Stakes race in Ontario back in 1973 and one of the first female jocks in North America. More than that, Bonnie works as Skye’s agent, a unique relationship that the pair believes will some day lead the racer to big things at Woodbine.

“It’s so much fun, because we have a connection that nobody else would have at the track,” said Skye, when asked to explain their working relationship.

“It does have its challenges,” added Bonnie.

“But, at the same time, it’s great because nobody would look out for me better than my mom,” said Skye, the 2013 Sovereign Award winner as Canada’s outstanding apprentice jockey. “Nobody’s going to have my best interests at heart like my mom does.”

Sitting in a stable office in the Woodbine backstretch, Skye and Bonnie often finish each other’s sentences. There is clearly a bond between the two that extends beyond the usual mother/daughter deal. They share a love of horses and racing and, although Bonnie never wanted her daughter to become a jockey, it was pretty obvious from the time Skye was a baby that she would do something in the horse-racing industry.

Both of Skye’s parents were involved in racing at Winnipeg’s Assiniboia Downs (her dad Robert Chernetz still races there), and Bonnie literally used to carry Skye around on her back at the track when she was training horses.

“Basically, I grew up there,” said Skye, who started riding show horses at four and decided at an early age that she wanted to become a thoroughbred jockey.

In fact, it was getting up in the morning that convinced Bonnie that Skye was serious about becoming a jockey.

“I was hoping she would want to do the show-horse thing, because being a jockey is pretty tough,” said Bonnie.

“But when it came to the show horses, I had to get her up in the morning. But when it came to going to the race track, it was, ‘Come on mom, we got to go.’ The passion was there for the race horses. And I think you need to follow your passion. She wanted it and I said, ‘If this is what you really want to do it, we should go to Woodbine.’

“That was my dream,” added Skye. “There’s no higher class of racing in Canada. It was kind of a ‘Go big or go home’ type of thing.”

Skye, who turns 21 on May 17, won her first race on May 19, 2012, aboard Sheza Rounder and captured her first stakes race when she guided the 2-year-old filly On Rainbow Bridge to victory in the Shady Well Stakes at Woodbine for Triple K Stable and trainer Dave Cotey, followed by a second stakes win, the Nandi, on the same filly in August. Last year, she finished eighth in the Woodbine jockey standings with 54 wins and earnings of $2,152,103.

It’s been a bit of a slow start this season, with two wins and six times in the top three in 22 starts, partly because Skye no longer has the weight advantage of being an apprentice.

“This is our transition year from being an apprentice to being a journeyman rider,” said Bonnie. “And there are those who will say she doesn’t have the bug anymore — the slang term for apprentice — so there are new challenges. But you just have to keep on working your way through that.”

Both Bonnie and Skye work hard at getting more and better mounts, but it’s difficult. Many trainers use the same tried-and-tested veteran jocks on a regular basis. There are days when mother and daughter literally make the rounds in the backstretch at Woodbine, stopping at stables to see if any trainers are interested in having Skye exercise their horses, with the hope of getting rides in races down the road.

“Going to barns and getting rejection and people always doubting you, that’s tough,” said Skye. “That’s the hardest part.”

It doesn’t help that Skye is not naturally an extroverted person.

It also doesn’t help being relatively new to Woodbine.

“That’s another thing that was hard for us, these agents and jockeys have been here for 15-20 years, they know everybody here,” said Bonnie.

“We’ve been here for three years, we had no ties here. We’re brand new faces trying to break in — and that’s a lot harder. And anyone who knew me when I was riding, they’re gone.”

Still, mother and daughter are confident Skye will do great things at the track as her career evolves, given her talent and dedication. When not racing or exercising horses, Skye, a fitness fanatic, can often be seen jogging around the track. She also does yoga for flexibility and strength.

“It’s funny, I’ve (put her on my horses) for two years, and I’ve never thought of her as an (apprentice),” said Cotey. “Anything can happen in a race with any rider, but I think she’s as bright as any of them out there. She puts horses in good positions where she can win. And the times we get into trouble are very few.

“I’ve been confident enough that I’ve ridden her in Stakes races, where we don’t get the bug allowance. I think she’s an extremely talented rider.”

Skye laughs when asked if her mom, the former jockey, offers her feedback after races, and if so, whether that’s difficult.

“She does, and it depends what kind of mood we’re in,” she said with a laugh.

At the end of the day, through good times and bad, as far as her mom being her agent, Skye wouldn’t have it any other way.

“We’ll go through slow patches. But you just have to wait it out and not get too caught up and wound up and anxious,” she said. “We just have to keep doing what we’re doing.”

As for Bonnie, watching her daughter race against the very best in Canada, every day is Mother’s Day.