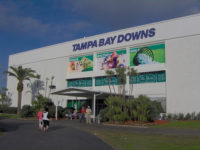 RACING SEASON TO SAVOR
Nov 22, 2021, 13:49 PM
by Mike Henry
Thoroughbred horse racing returns to the west coast of Florida on Wednesday at Tampa Bay Downs with a nine-race card beginning at 12:43 p.m. Gates open at 11 a.m. and admission, as on all Wednesdays, is free.

Full fields are the order of the day, with all but one race attracting 10 or more entrants. Four races are scheduled on the track’s acclaimed turf course, with the others on the main dirt oval. The feature race is the seventh, a mile-and-a-sixteenth turf contest for fillies and mares 3-years-old-and-upward offering $28,000 in purse money.

“We are thrilled to again offer the Tampa Bay area’s horse racing fans, and our simulcast viewers across the country, the spectacle of the Sport of Kings,” said Peter Berube, the track’s Vice President-General Manager. “This is our 96th anniversary season, and we believe the quality of racing overall will be stronger than ever.

“We encourage anyone with an interest in horses who has never been to Tampa Bay Downs to join us for an afternoon of excitement, if not on Opening Day, then throughout the meeting,” Berube added.

The 2021-2022 meeting, which officially began on July 1 (the second-day of the track’s annual Summer Festival of Racing), will run through Saturday, May 7 (Kentucky Derby Day), plus an additional day of racing on June 30 to kick off the 2022 Summer Festival.

Racing primarily will be conducted on Wednesdays, Fridays, Saturdays and Sundays (beginning Dec. 26) throughout the 91-day meeting, with an additional day of racing on Thursday, Dec. 23. The track will be closed Thanksgiving, Christmas Day and Easter Sunday, April 17.

Serious handicappers are already salivating at the money-making opportunities presented by what appears to be the deepest, most talented jockeys’ colony in track history. Heading the list are two-time track champion Samy Camacho, who topped last year’s standings with 111 winners; six-time champion Daniel Centeno, who won four consecutive titles from 2006-2010; and five-time leader Antonio Gallardo, who set the track’s single-season wins record in 2014-2015 with 147.

Another jockey vying to contend for top honors is Pablo Morales, an Oldsmar fixture before moving his tack last winter to Aqueduct, where he finished ninth in the standings. Morales went on to dominate his competition at Presque Isle Downs, where he rode 120 winners – 76 more than the runner-up – and appears to be in the best form of his excellent career.

Allen is currently on the sidelines after being injured last month at Presque Isle Downs, but is expected to return to action soon.

Newcomers who are likely to make an impact include Fernando De La Cruz, who returns to Tampa Bay Downs after spending the last four winters at Oaklawn Park; Rocco Bowen, who moves here from Hawthorne in Illinois; and John Bisono, who shifts his business from the mid-Atlantic region with 1,934 career victories.

Tampa Bay Downs also has a strong cast of trainers this season, led by Gerald Bennett, who has won six consecutive track titles. Bennett, who led the pack last season with 56 winners and has also won the last two Tampa Bay Downs Owners crowns under his Winning Stables, Inc., banner, enters the meeting with 3,997 career training victories and is set to become the 14th member of his profession to reach the 4,000 milestone. He sends out five runners Wednesday.

The track’s stakes schedule is filled with opportunities for fans to see many of the top horses in training. It consists of 26 stakes races worth more than $3.3-million in total purse money, including seven races carrying graded status.

As always, the biggest race of the season is the Grade II, $400,000 Lambholm South Tampa Bay Derby for 3-year-olds, to be run for the 42nd time of March 12. The annual showcase is one of five stakes – four graded – on the Festival Day 42 card. The Lambholm South Tampa Bay Derby is a “Road to the Kentucky Derby” prep race for horses seeking points toward qualifying for the Run for the Roses.

An early season highlight is the much-anticipated return of the Corgi Races on Dec. 11. They will be held following that day’s racing. The lovable canines are always a hit and provide an abundance of photo opportunities.

Tampa Bay Downs is open every day (except Thanksgiving, Christmas and Easter, as mentioned) for simulcast wagering, no-limits action and tournament play in The Silks Poker Room and golf fun and instruction at The Downs Golf Practice Facility.