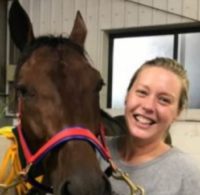 On any evening when one of her standardbreds lines up behind the starter car at Woodbine Mohawk Park, the genial caretaker in the Blake McIntosh can be both seen and heard. She is a huge motivator.

“I cheer them on down the stretch,” said Gillespie, a native of Vetlanda, Sweden. “And I’m probably too loud most of the time. I’m the one yelling, ‘Don’t stop! Keep going!’ if they are leading or close to the lead. I talk to them like they’re going to answer me. I have full conversations with them. It must be very interesting to listen to. People definitely know I’m there.”

That exuberance and heartfelt outpouring of emotion is the furthest thing from manufactured theatrics. Instead, it is, at its very core, a natural reaction for Gillespie whenever she stands railside to watch one of her horses compete.

By her own admission, those energetic expressions are somewhat of a sight to behold, a series of shouts accompanied by a particular action that she is at a loss to explain.

“I’m always slapping my leg. I don’t know why, but everyone always tells me that I’m doing it. I don’t even know I’m doing it. So, I scream and I slap my leg when they’re coming down the stretch. It’s quite a sight. It doesn’t matter what kind of race it is, you just want to see your horse do well. You work hard and you want to see those efforts pay off. When there’s a chance for them to win, you’ll hear me screaming.”

Gillespie’s foray into the standardbred world began through an equine program in Sweden that offered a work placement opportunity in the United States, which would be the start of an eight-year stint there as a caretaker.

Wherever she’s found herself, in Europe or North America, she’s always felt right at home around the horses.

“Having that contact, that connection with the horse is something that has always resonated with me. I enjoy the one-on-one interactions. After you’ve done jogging, it’s great to have that time to care for the horse. That’s my favourite time.”

Gillespie has forged strong bonds with several standardbreds over her career, including a standout trotter by the name of Strong Yankee.

“When I worked with [legendary trainer] Trond Smedshammer, that horse became my all-time favourite,” she said of the son of Muscles Yankee who went 11-9-2 from 31 starts along with $1,495,805 in career earnings. “He had this awesome personality even before he became so good on the racetrack. For a stud, you never knew he was one. He was so big, but he was so kind. I don’t know if I’ll have a horse like him.”

There have been other memorable ones along her horse racing journey.

Fast N First, a standout sophomore pacer who was a Grassroots champ and finished second to Southwind Ozzi in the 2019 edition of the Little Brown Jug, is another that comes to mind.

Currently on the sidelines recovering from an injury, the 5-year-old son of Bettors Delight has been a consistent performer for the MacIntosh team.

In 41 starts, the bay, who MacIntosh co-owns with Ridgeway Racing, has 14 wins and 27 top-three finishes accompanied by nearly $400,000 in earnings.

“He’s close to Strong Yankee in terms of personality,” started Gillespie. “You’d also never know he was a stud too. Their personalities are just so awesome.”

Gillespie offers up similar praise for a rookie trotting filly who shares a name with a 1971 science fiction classic movie directed by Stanley Kubrick, a film that’s based on Anthony Burgess’s novel of the same name.

Clockwork Orange, a Grassroots winner on September 21 at Woodbine Mohawk Park, might not have the same personality traits as her male counterparts, but the daughter of Resolve has a presence about her, according to Gillespie.

“She’s a horse that has a great personality too. She just has a way of drawing you in.”

Almost all of them do, admitted Gillespie, who is married to Jim Gillespie, assistant racing secretary at Woodbine Mohawk Park.

As for who is more excited to see the other every morning, horse or human, when she first sets foot in the stable, Gillespie considers it a tie.

That alone makes her job a win-win.

“I spoil them way too much. It starts the moment I walk in and see them. When they see me, they want to go outside. They know I’m going to turn them out, and when they come in, they know that it’s treat time. They know how to get their treats. Some horses are smart enough to realize that when they are finished being brushed and taken care of, then ready to be put away, they will get a treat, but they will also know that they will get a treat when everyone is put away too. They get extremely spoiled, but that’s okay. I just really love being around them and I miss then when I’m not.”

Although colder weather is on the way and winter isn’t too far off, none of it – rain, sleet, snow or otherwise – will stop Gillespie from taking up residence at her coveted spot on the Mohawk apron.

And when one of her horses is charging down the lane, the decibel level and number of leg slaps will noticeably increase.

“These horses, they absolutely know when they’ve won. It’s a confidence booster for them. If they’ve won a few in a row, they definitely know what they’ve done. There’s no doubt in my mind that they do. You can just sense it and you can see it.”

The same applies for their proud, and occasionally loud, caretaker.

“When they win, you feel like you are on cloud nine. It’s always the same feeling and it’s the best one you can have.”