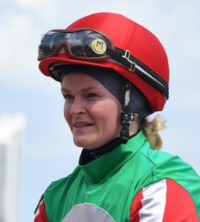 Canadian-born apprentice jockey Ailsa Morrison, a 23-year-old native of Moncton, New Brunswick, picked up her first NYRA circuit win Friday at Aqueduct Racetrack in Ozone Park, N.Y., guiding Cover Photo to a 3 1/2-length score in a six-furlong claiming sprint for fillies and mares 3-years-old and up.

Cover Photo, sent to post at odds of 9-1 for owner-trainer Marvin Richards, tracked in second position as Dazzling Speed led through a leisurely half-mile in :48.02. Morrison, a 10-pound apprentice, angled the 5-year-old Munnings chestnut into the four-path, taking command in upper stretch and drew clear for a resounding win in a final time of 1:13.66.

“It’s a dream come true,” Morrison said. “The plan was just to get her out well and give her a clean trip. I tipped out because the trainer said she didn’t like kickback. Once she got clear, she started running. We were able to get the job done and get the win. I really can’t thank the team enough for preparing her as well as they did. They told me she was ready for something good and they weren’t wrong.”

Morrison’s family moved to Windsor, Ontario when she was 10 years old and the aspiring rider started to ride event horses, representing Canada at the North American Junior Championships on two occasions.

She said she started galloping horses as a way to supplement her eventing competitions, eventually landing an opportunity to work for Mike Cooke at Classic Mile in Ocala.

“I was teaching the babies how to go around there and I was learning with them. I just fell in love with it more and more every day,” Morrison said.

In 2018, Morrison followed her dream of becoming a jockey to Woodbine Racetrack in Etobicoke, Ontario, and got her first job at the track working for trainer Roger Attfield – a member of both the Canadian and U.S. Horse Racing Hall of Fame.

“Roger Attfield really helped me out a lot,” Morrison said. “The following year I worked for Scott Fairlie and he gave me my first winner at Fort Erie. His wife, Michelle Rainford, is a former jockey and she helped me out tremendously.”

Morrison finished off-the-board with her first mount on October 5, 2019, at Woodbine, but the determined rider found her way to the winner’s circle in her fourth start by guiding the Fairlie-conditioned Dot’s Last Call to victory two weeks later at Fort Erie.

The young rider said her first win was made even more memorable by the encouragement of fellow rider Sahin Civaci, who she passed aboard the tiring You’re Batman in the stretch run.

“I was coming on the outside of him and he yelled out, ‘Go Ailsa go!’” recalled Morrison. “That moment was very special – to have the other jock supporting you and wanting you to do well.”

Morrison continued to ride through December 2019 before taking an opportunity to breeze horses through the winter of 2020 at Payson Park for another Hall of Fame trainer in Bill Mott.

“I have so much respect for Bill. He’s such a class act individual,” Morrison said. “He goes over every horse with a fine-toothed comb every morning. The attention to detail the barn has is incredible – it’s a well-oiled machine and runs so smoothly. I think that attention to detail makes all the difference in the afternoon as well.”

Morrison said one of the highlights of working for Mott was being the regular breeze rider for Channel Maker – a multiple graded-stakes winning millionaire – and a fellow Canadian-bred.

“To sit on a horse of that class and that caliber, it gives you goosebumps,” Morrison said. “He just has that energy and essence to him. He has a little bit of an unorthodox way of going, but that’s what makes him even more special.”

Morrison said she also learned a great deal as the breeze rider for multiple graded-stakes winning filly Obligatory, who won the G2 Eight Belles and G3 Chilukki at Churchill Downs in Louisville, Ky., this year.

“She was my filly to ride from the day she came in and she’s been really cool to work with. I got a lot of opportunities there and I learned a lot,” Morrison said.

That Mott was able to use Morrison on some of his top horses is high praise for a young rider.

“I like to think I have a calming effect on a horse,” Morrison said. “Bill always said my greatest asset is my hands because of my time with the show horses and being able to have them quiet and communicate with their mouth that way. Really, that’s your only means of communication with them when you’re out there with them in the afternoon.”

During the summer months, Morrison made regular visits to the Equicizer located behind the jock’s room underneath the NYRA press office, practicing her craft under the watchful eye of Alvarado and a host of local riders including Hall of Famer John Velazquez.

“Junior is a great guy and a great rider. He’s helped me out a lot,” Morrison said. “The Equicizer is a must-use tool for a rider and I really appreciated him and the other jockeys – like Johnny V – taking time out of their day to help me out.”

The apprentice returned to the saddle in November at the Big A, finishing second with Him She Kisses in a starter allowance sprint. She’s off to a great start at the Big A winter meet with a record of 10-1-2-2 heading into Sunday’s card.

Although mounts can be hard to come by in a competitive colony, Morrison said she is working to make the most of every opportunity.

“All of the jockeys here are top tier and the cream of the crop. I’m very fortunate to be able to ride with them,” Morrison said. “People might look at it as being a disadvantage for me with so many good riders here, but I think from a standpoint of learning and getting better there couldn’t be a better group to be around.”

And rather than waiting for mounts to come, Morrison said she’ll continue to work on her craft each morning and afternoon at the track.

“I just want to be better than I was yesterday. I want to keep learning as much as I can so I can be the best rider that I can be. Where that takes me, we’ll see,” Morrison said. “I want to work on my finish down the stretch and just continue to get stronger and better at it. It’s something that comes with the mounts and time – and the Equicizer. I’ll keep working at it.”