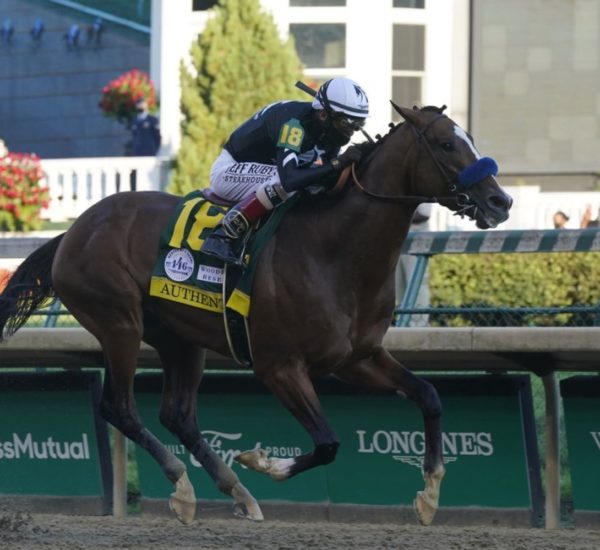 With the calendar year about to change, we’re not far off from the momentous occasion of the arrival of Authentic’s first foals.

According to Equineline, the number of mares who were reported to be carrying live foals by Authentic, as of the end of October, was 229.

In recent updates we shared news of some very distinguished mares carrying Authentic’s progeny while selling at both Fasig-Tipton and Keeneland. In case you missed those updates, here they are: Keeneland and Fasig-Tipton.

Today we’re putting the spotlight on some other notable mares who are in foal to the 2020 Horse of the Year, who will begin his second year of stud duties at legendary Spendthrift Farm when the new breeding season kicks off in February.

Cayala: A daughter of champion sprinter Cherokee Run, Cayala is also a dam of one of MyRacehorse’s stable runners, Provocateur, who is by Into Mischief, a son of Authentic. Provocateur’s full bother, Roderick, is a stakes-placed performer with earnings topping $100,000.

Supreme: A daughter of superior sire, the late Empire Maker, Supreme is owned by the prolific Stonestreet Thoroughbred Holdings after her purchase while in foal to Giant’s Causeway for $800,000 at Keeneland in 2013. Among the mare’s progeny is Silver State, a son of Hard Spun, who is an earner of $1.9 million and was the winner of this year’s Grade 1 Metropolitan Mile Handicap.

Quick Flip: Is a Spendthrift-owned daughter of champion sprinter Speightstown and is the producer of Following Sea, the winner of this year’s Grade 2 Vosburgh Stakes and the runner-up of this month’s Grade 1 Cigar Mile Handicap. A half-sibling to Following Sea, Gimmick, by Into Mischief, was stakes-placed as a 2-year-old. Before being bred to Authentic this year, Quick Flip produced a colt by Hard Spun.

In the coming weeks, we will be sharing a video of Ned Toffey, Spendthrift’s general manager, discussing Authentic’s exciting first year at stud and what to expect from our star’s second year in the breeding shed.