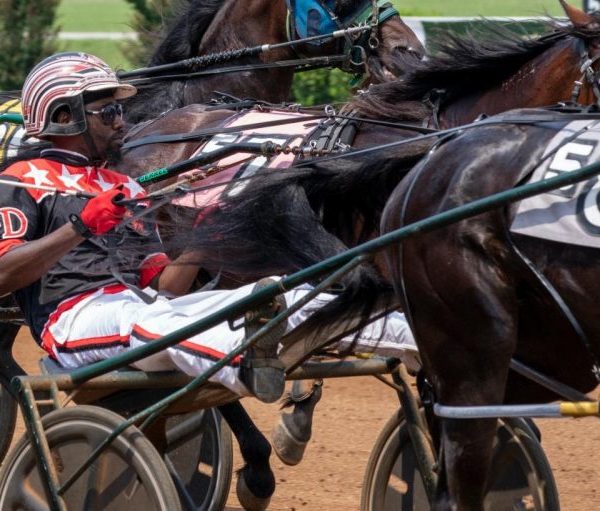 Crisler finished three victories in front of Tyler Shehan, who drew into contention with a four-win day Sunday. Crisler had 85 starters, trailing only Shehan’s 86 to lead all drivers at the 12-date meet that ended Tuesday.

It was the Mississippi native’s first title coming over The Red Mile’s clay surface. He previously won driving crowns at Bluegrass Downs and Thunder Ridge, both now defunct.

“My first one here, so I’m pretty excited,” Crisler said. “The top drivers are here. You have drivers who come from all over. They like racing here. So you win a title here driving against top drivers from other states, it means a lot.”
Crisler, who padded his lead by taking Tuesday’s fourth race with 6-1 shot Scarlett Grey, said he had no expectations that he’d win the driving title at the meet’s start.

“No idea,” he said. “When I secured the top, I thought, ‘OK, I might have a chance then.’ That was like the second week.”

Lorentzon, who has a strong stable of about 50 horses at her ACL Farm in Paris, was surprised to hear she won a piece of the training title. She sent out a meet-high 39 horses, with a meet-high nine seconds and five thirds to go with her eight victories.

“I was very surprised because I didn’t think we’d been doing that good,” she said. “… It’s a tough meet. It’s kind of lower-class horses, racing in conditions (featuring race eligibility restrictions) here. But they are literally flying in many of the miles out here. It was tough competition.”

Jerrell won four of the $25,000 Kentucky Proud Series county-fair finals as a driver and three as a trainer. He had a slim edge over Lorentzon for the most purse earnings for a trainer at the meet, $75,865-$75,375. He pulled into the tie for the win title when he drove Timo Kemp to victory in Tuesday’s seventh race for the 3-year-old trotter’s third score of the meet.

Crisler and Jackie Gray of Lebanon, Ky., were next in the training standings with seven wins each. Crisler, with a pool of only eight horses to draw on from his stable, was delighted with his training production.

“Every horse but one won once or twice,” Crisler said. “I’m probably labeled more as a driver than a trainer because I catch-drive other horses. Me winning a training title would be a big accomplishment because I don’t have 30 or 40 head. Doing well with seven or eight horses is a big accomplishment.”

Horsemen were appreciative of the extra 12 dates that the Corbin at Red Mile meet provided to the Kentucky harness-racing calendar.

“Everybody was glad to see more racing,” Jerrell said. “We’d race at Paducah (Bluegrass Downs) the middle of June to the middle of July. But the purses were a third of what we were racing for here. Anybody who was racing in overnights (non-stakes races) around here had to be pleased with the meet.”

by Jennie Rees, for Kentucky Downs

Lexington, KY — Mississippi doesn’t have any pari-mutuel horse racing, but the state has become one of the largest sources of harness horsemen in Kentucky. Look no further than the Corbin at The Red Mile Meet that concluded Tuesday.

Mississippi product Randy Crisler won his first driving title over The Red Mile’s famed clay with a 16-13 lead over Tyler Shehan. With a stable of only eight horses, Crisler also ranked among the winningest trainers with seven victories. Anette Lorentzon and Randy Jerrell led all trainers at eight wins apiece during the 12-date session staged as a prelude to the harness track to be built in Corbin by Kentucky Downs’ ownership and Keeneland.

When Louisville Downs closed in 1991 upon the Standardbred track’s sale to Churchill Downs, Kentucky harness horsemen were forced to scatter, many to Illinois, Indiana and Ohio. The Mississippi horsemen helped fill the void at Kentucky’s remaining meets. But how did they develop a love for the sport with no exposure to formal racing growing up?

It’s called back-riding or back-pacing — culturally the Standardbred equivalent of Louisiana’s bush tracks famous for producing jockeys. It’s a way of life in the region around Jackson, Miss., and beyond, even into Alabama, where on weekends families congregate to cook, barbecue, socialize and especially to see who has the fastest horse. The horses wear hobbles to keep them on the pacing gait but are ridden under saddle, instead of being driven from behind in a race bike.

“It’s our background,” Crisler said. “Our fathers, our grandfathers, our uncles. It’s all family-related. It started out as back-pacing. They have the hobbles on and the hangers, but they throw the saddle on the back. That’s how we started. Then we got into the bikes.

“It wasn’t about the money. It was about who had the fastest horse in Mississippi. We’d all get together on Saturday or Sundays. We’d cook, we’d eat, whatever — and we’d race.”

Crisler said that, growing up, as soon as he got off the school bus, “Dad was like, ‘Drop your books. Let’s go train horses.’ It just stuck with me.”

He advanced from back-riding to the fairs in Mississippi and Tennessee.

“Then I was, ‘OK, maybe I can go to another level as far as pari-mutuel,’” said Crisler, who progressed to Kentucky at the now-defunct Bluegrass Downs then on to Chicago and Ohio before settling into Hoosier Park while also racing in Kentucky. “And I did it.”

Asked the difference between riding a pacer and driving one, Denson said, “The steering is about the same, but out there (at a regular track) is more like strategizing. When we ride on their back, it’s like who can get to the front first and if you can get a horse to stay there.”

He said a lot of the Mississippi horsemen take their stables back home for the winter, training over the half-mile tracks. Horses that didn’t cut it at the track are used for back-riding. As are some that did cut it.

“We take them, harness them up and go on the dirt roads or half-mile tracks around Mississippi and race them,” Denson said. “Everybody gets together on a Saturday and we find us a dirt road or a track, if it’s not raining. We race all day long. It’s really fun. We actually have a big event in Mississippi called King of the Boondocks. Louisiana people come, Texas. They bring their horses in and we see who has the fastest horse around.”

It’s match racing, with the two names drawn out of a hat squaring off.

Still, often the racing is more for pride than any prize. Or, as Denson said, “Who’s got the baddest horse in Mississippi.”