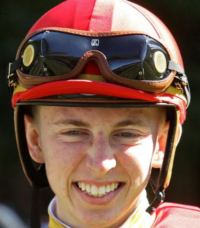 A top rider at Arlington Park in 2021, the 22-year-old has embarked on a promising career that he hopes to continue in Toronto.

Declan Carroll, one of Arlington Park’s leading riders in 2021, is headed to Woodbine.

Declan Carroll, one of Arlington Park’s leading riders in 2021, is hoping to ride at Woodbine for the 2022 season. Carroll, 22, is awaiting paperwork to be approved so that he can move his tack from Fair Grounds, where he is currently riding, to Toronto. The Woodbine season is set to begin April 16. Gary Kemplen would be his agent. This week, Carroll is spending some time in Ireland, where he was listed to ride in his first race there on March 11 at Dundalk.

Carroll began riding in 2018 and for the past three years has ridden an average of 400 horses per year, with 145 career wins. He recently guided Pyron to a last-to-first victory in the Colonel Power Stakes at Fair Grounds (below).

Carroll has a strong horse racing pedigree as the son of former trainer David Carroll, who currently works as assistant trainer to Mark Casse, Woodbine’s leading trainer of 2021. His mother, Kim, also works for the Casse stable.

Following his first career win at Keeneland in 2018, Carroll’s business exploded in 2018/2019 at Fair Grounds and after recovering from an injury he enjoyed success at Ellis Park in the summer of 2019, finishing fourth in wins.

Carroll rode at several Midwest tracks during the COVID-19 pandemic, but shifted his tack to Arlington International Racecourse for its 2021 meet, where he was sixth in the rider standings by wins.

The young rider has ridden at Woodbine before. His first ever ride came in Toronto for Casse in September of 2018. He rode Mr. Cheerful to a fourth-place finish from post one in a maiden race. His first win came seven rides later when he guided B Deb’s Fortune to victory at Keeneland.