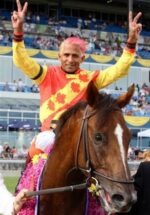 With a 40-year career in the irons, this enduring jock is one of several veteran riders who defy the odds in this punishing career.

Emile and wife Lisa with their kids on the occasion of him receiving the Avelino Gomez award in 2011.

“When I get to that stage when I get on a horse and I’m afraid of falling down, then it’s time for me to find something else to do. Or if I go in a race and I’m worried about getting hurt, then I shouldn’t be doing it.”

At 57, veteran jockey Emile Ramsammy is one of the oldest jockeys on the North American circuit. Riding in over 18,000 races and accumulating over 2,000 wins over the last three decades in Canada, he is a true elder statesman of the sport.

The age might just be a number, but it paints the landscape for the storied career of a jockey still riding high in the irons.

“My racing career is a fairy tale story. I was never involved in the horses at all. I never saw a jockey and horse live until I went to the riding school,” said the jock who was born in Trinidad but grew up in Guyana.

In Guyana, Ramsammy’s great grandfather had a herd of wild horses. One afternoon, an intrigued teenage Ramsammy decided to get on one of those horses.

“I took a chance and I jumped on her‒ this totally wild horse. Now she is walking towards the herd and then she went into a jog. Soon everybody in the herd picked up in their heads and were watching this horse with a rider on. What I was paying most attention to was the stallion! When she got maybe thirty or forty yards away from the herd I just bailed off. That was my only ride prior to going into the riding school.”

In 1979, Ramsammy returned to Trinidad and attended jockey school. A year later, he rode in his first race. That was forty years ago, but Ramsammy still recalls both the day and the horse. “It was April 19th, 1980 and the horse’s name was Sealed Orders.” That summer Ramsammy clinched his first win aboard a horse named Bluegrass in Trinidad.

Ramsammy ultimately captured 500 wins in the Caribbean, but one horse that left an undeniable mark on his career and his heart is Call To Account.

“He was Trinidad-owned and I rode him twice. I won the Gold Cup [1988[ with him the first time I rode him and we broke the track record easily. I went back to Trinidad and rode him again in San Fernando in the President’s Trophy and he won comfortably again and broke the track record. He was dry-coated [suffered from anhidrosis, the inability to sweat] and he died a couple of months before his next race. He was an amazing animal; I thought he was a freak.”

Another couple of great horses he rode to victory in the Barbados Gold Cup include Frisky Wharf (1985) and Stangrave Park (1987).

Ramsammy rode a handful of races in Canada in the mid-80s before permanently setting down roots in 1990 with his wife, Lisa.

Already an established rider in the Caribbean, it didn’t take long for Ramsammy to gain prominence on the Canadian circuit.

“I was the first rider in Canada to ride a thousand races in a season in ’96 ‒ that’s how many races I was riding,” said Ramsammy.

The jockey earned the 1996 and 1997 Sovereign Award for Outstanding Jockey. In 2011 he also earned the Avelino Gomez Award.

Of the many stakes wins Ramsammy has accumulated over the last four decades, it’s not surprising to hear one of his favourite highlights includes winning the Queen’s Plate with Victor Cooley when he was 34.

“The first one in 1996; it was a long time ago. I won that day riding a horse that even though it was the favourite, was questionable coming out of the one hole. It worked out well and we won comfortably.”

A lot can change in a decade, however; moving his tack over to the West Coast in the late 1990s proved an interesting venture (and misadventure) for the Trini-born rider.

“In 1999 I was injured and I will never forget because of how it kind of ruined my career in a sense. I was out riding in California, can’t do anything wrong. Riding for the top guys. First, call for Baffert. I’m at Hollywood Park and I’m about twenty winners in front of my closest rival.

“Even the press started to call me ‘one a day Ramsammy.’ It was crazy. I went to California and it was like a dream come true. I’m riding all the top horses and for all the top trainers.

“Then I came back to Canada to ride Euchre in the Plate for Stronach and Bobby Frankel and we finished third. The race after the Plate I was on a horse for Roger Attfield and just about to pick up the race when he snapped a leg and I went down. I guess I got hit from behind and broke my left collarbone.

“I lost six weeks there. I couldn’t get going and lost all my business and that’s how I ended up back in Canada. That’s how Victor Espinoza came on the scene because he took over all my business.”

Ramsammy recovered from his injury and built his business back up, earning over $5 million in earnings the following year.

Unfortunately, given the unpredictable nature of the sport, a rider can be sidelined even before a race day comes calling.

“I had a horrible fall in Barbados in 2012. I was working a horse in the morning and I was in company with a young apprentice. We were going to the pole, but my horse was tugging me and the saddle end up slipping and I went straight over his neck in a blink. I guess I hit the rail and broke my shoulder. I got up and the ambulance came. I said to them ‘try to see if you can snap it back in place,’ not knowing it was broken.”

Racing historian Tom Cosgrove points out just how precarious the nature of a jockey’s career can be.

“I would say for the most part a jockey’s career would last two decades. The reason I say that is because of the high level of danger with what they do. They have an ambulance that follows them around during the race so that accentuates the point. Barring injury and also their own physical health, you know some riders have to pull weight on a consistent basis which is very difficult on the body.

“Overall though, the typical point of it all is that these riders are highly-skilled athletes with great hand-eye coordination and great reflexes. With every athlete in their mid-20s to their mid-30s that’s when they are in their prime.”

Woodbine’s jockey colony is also no stranger to seasoned riders. Hall of Fame inductee Gary Boulanger and veteran rider Steven Bahen, both in their early 50s, have been riding since the late ’80s. Out west, well-known jock Richard Hamel rode for over three decades before retiring at age 50 last season. And out at Grand Prairie raceway, Carl Hebert is still riding in his mid-50s.

A quick trip down memory lane (and the Canadian Hall of Fame) will show that several great jocks rode late into their 50s, including Sandy Hawley, John Longden and Russell Baze. Jockey Pat Remillard rode until age 60 and back in 1966 was the oldest jockey riding on the Canadian circuit.

Known as ‘the grandfather of racing,’ 66-year-old Bahamian rider Gary Bain has ridden since the late ’70s. This year, at the age of 67, Bain has ridden several races at Gulfstream, effectively making him the oldest jockey on the circuit. While Bain hasn’t ridden since March, he confirmed that he is still working horses in the morning and intends to race ride.

Another racing sexagenarian of note is Perry Ouzts, who turns 66 next month. Over four decades into his jockey career, Ouzts is currently riding at Belterra Park.

Frank Amonte rode for a whopping six decades and is believed to be the oldest rider to win a race (age 69 in 2005) ‒ one at Suffolk Downs and another at Northampton Fair in Massachusetts ‒ just a day short of his 70th birthday.

“They are riding a 1,100-pound animal going 35 mph and there’s not much between them and the horses. If you look at the saddles that they use and just the speed and how quick things can happen during a race, to have the careers they have it’s remarkable when you think about it,” said Cosgrove.

As the years crawl onwards, Ramsammy is keenly aware of the important role fitness plays in this game. “I’m a health and fitness freak. I say to people ‘when you are fit, you bounce well.’

According to Ramsammy, core strength is key. “I tell the guys I never have any back problems. I say all you have to do is sit-ups, because as long as your core is strong your back will never hurt you.

Whether that’s a trade secret or just his own personal formula for keeping in the saddle, Ramsammy is still plying his trade at both Woodbine and Fort Erie racetrack. He has already visited the winner’s circle five times at the Fort meet since the 2020 racing season began.

Ramsammy still shows no signs of letting up. “I love this game so much. To get on a horse in the morning, it makes my day.”