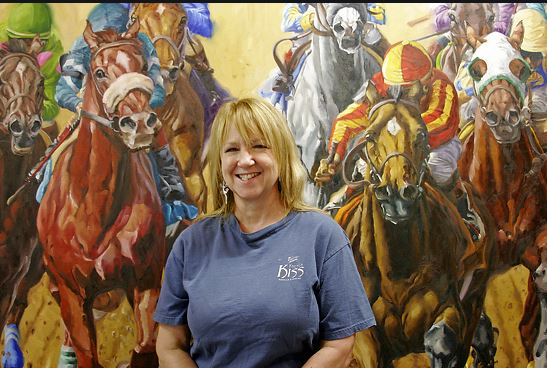 “So the horse that walks around, eats grass, looks at the view and gives every appearance of tranquillity was, in fact, designed by God to explode.” – Dr. George Pratt

“They epitomize grace, athleticism and inspire dreamlike passion. Horses are also massively powerful and dangerous. I vividly portray this duality of their nature.”  –  Sharon Crute

Sharon’s father and older brother used to go to the horse races every Saturday at the old Narragansett Park in Pawtucket, Rhode Island. A horse-crazy kid, she would pester her father, constantly begging to go with them. One Saturday morning her father reluctantly obliged with the condition that she would have to tell anyone who asked that she was 16, not 12 years old. At the admission booth, the clerk eyed her warily and asked her dad how old she was. Her father returned the stare and said “she’s 16 years old.” The clerk sighed and motioned them inside with a nod of his head.

During that afternoon of racing, Sharon’s dad brought her down from their seats to stand next to the starting gate as the horses were loading. With a great crash the gates broke open and a bell clanged loudly as the jockeys whooped and hollered to urge their mounts as they thundered down the track. The flashing colors, the sounds, and the feel of the ground rumbling beneath her feet would be a pivotal moment in this young girl’s life.

Because Sharon excelled in art throughout her school years, after graduating high school her father encouraged her to continue her studies in the arts. She received a BFA from Swain School of Design in New Bedford, Massachusetts with a major in painting. Soon after, she married thoroughbred horse trainer Michael Bray and would work as his assistant in his racing stable for the next 25 years.

With a wealth of industry experience, Sharon possesses deep-rooted respect for the equine athlete and attempts to reflect that feeling in her artwork. The focus of her painting is to capture the milieu of the racing lifestyle and to convey the exhilarating speed and danger inherent in the sport. She endeavors to express the subtle with an undercurrent of volatility resulting from an intimate knowledge of the anguish and exhilaration experienced by those who love horse racing.

Sharon’s paintings are collected internationally and she maintains an extensive list of clients. Privately commissioned portraits of horses are in constant demand. She and her husband are currently based in Saratoga Springs, New York where Sharon exhibits for the entire summer race meet on the track at the Saratoga Race Course.