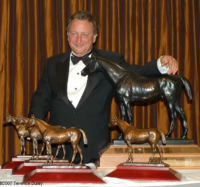 From betting on the races at Greenwood to the Canadian Horse Racing Hall of Fame, Eugene Melnyk rose to the top in horse racing. (Winding Oaks Farm photo)

When Eugene Melnyk had a passion for something, he went all in.

In business, in sport, in horses, and in life, Eugene went big. He knew how he wanted to do things and he pushed those closest to him to achieve the highest of heights. The founder of Biovail, the huge pharmaceutical company, he grew that company from $19 million in profits to over $1 billion from 1990. He bought the Ottawa Senators of the National Hockey League in 2003 when the team was on the brink of being moved from Ottawa. He donated millions to schools and healthcare.

In horse racing, Eugene graduated from a young boy looking for discarded winning tickets on the floor of Greenwood racetrack to a member of the Canadian Horse Racing Hall of Fame. He raced dozens of champion horses throughout North America, one of which is currently one of the world’s leading stallions.

Sadly, Eugene had been battling illness since 2015 when he received a liver transplant. His family announced late on March 28 that he had passed away. He was just 62 years old.

Many of us working in Ontario horse racing met Eugene in 1998. He had regularly frequented the races, accompanying his Uncle Leo on the weekend journeys. Eugene, whose late father Ferdinand was an emergency doctor and whose mother Vera still lives in Barrie, ON, dabbled in horse ownership with friends Bill and Iris Bristow from Campbellville.

His horses were mostly claimers, so in 1996 he decided to bring things up a notch. With the Bristows he paid $120,000 US at the Keeneland September Sale for an Ontario-bred colt by Silver Deputy – Adorned, bred by the famed Windfields Farm. The colt was sent to a young, up-and-coming trainer in the States, Todd Pletcher, a former assistant to the legendary D.Wayne Lukas.

Named Archers Bay – like all of Eugene’s horses, he was named after a favourite spot in Barbados – the colt raced south of the border until he came north for the 1998 Queen’s Plate and won the 1 1/4 mile Canadian classic as Eugene’s first-ever starter in the race.

From there, Melnyk built his own racing empire which grew to close to 500 horses at farms in Canada and his own Winding Oaks in Ocala, Florida. He had horses racing everywhere and at all levels. His yearling purchases quickly became graded stakes winners, most notably one of his favourite horses, Speightstown, a son of Gone West.

Speightstown won the Breeders’ Cup Sprint and earned over $1.2 million before going on to be a top-class stallion. There were graded stakes winners such as Pico Teneriffe, who ten joined Eugene’s broodmare band and produced champion Marchfield, also a millionaire. Sealy Hill, a homebred trained by Mark Casse, won the Triple Tiara and Woodbine Oaks and is the only filly to have done so. She was named Horse of the Year in 2007. Harmony Lodge was a Grade 1 winner, as was Flower Alley.

In all, there were 62 graded stakes winners raced by Eugene, all carrying the blue-and-gold silks, the colours of Barbados and Ukraine, where his family is from.

Eugene lived in Barbados at The Crane, an area on the southeast side of Barbados that overlooks the ocean. He also enjoyed taking part in that country’s biggest horse race, the Sandy Lane Gold Cup, run at the Garrison Savannah in Bridgetown. Eugene won the race in 2004 with Kathir and again in 2010 with his homebred Sterwins. Each time he had a horse entered in the race, Eugene invited some 200 of his friends and family to the race and to enjoy a three-day stay, all paid for. The after party at his house always featured a big name concert by such stars as Bryan Adams, Bon Jovi or K C and the Sunshine Band.

The hockey and the horses began to clash, however, and in 2014 Eugene dispersed virtually all of his horses.

“As a young boy who grew up watching and admiring the horses at Woodbine Racetrack in Toronto, it still remains very overwhelming to know how privileged and fortunate I have been to be part of such a wonderful and close-knit community of people who share my passion for horses and the sport of horse racing. None of my horse racing achievements would have been possible without my staff at Winding Oaks Farm and Melnyk Racing Stables who all know how deeply grateful I am for their dedication and commitment to our horses,” said Melnyk. “While I will always remain a part of horse racing, I feel I have accomplished all that I set out to do and now is a good time to step back from the sport. I came into this sport twenty years ago with plenty of dreams and I leave with a lifetime of memories.”

Eugene did not miss too many big races as a spectator on-line, however, as he continued to work on his Ottawa Senators and various new companies. But it was not long after that sale of his horses that he became quite ill and soon learned his liver was failing. After a search through friends and family could not find a match for his liver (he had a rare AB blood pattern), the Ottawa Senators made a public plea on behalf of Eugene and his family. He was matched with an anonymous donor who donated part of his liver to Eugene.

Eugene then started The Organ Project to raise awareness and funds for organ donation.

Two years later, Eugene was inducted into the Canadian Horse Racing Hall of Fame and he was presented the ring by Bill Bristow.

Eugene was present on social media a lot during the two years of  the COVID-19 pandemic. He was also able to visit his mother Vera in Barrie, but had fewer trips to Barbados and back to Toronto.

In recent weeks, Eugene purchased a full page ad in the Toronto Star as support for Ukraine during its war with Russia.

Condolences and emotional messages poured in through social media and on the air as news of Eugene’s passing on March 28 became known. His daughters Anna and Olivia were at his side.

Eugene was a tough businessman who was always looking for new ideas and more lands to conquer. He was very giving, too, supporting everything from retired racehorses to school kids and was always ready to help out a family member or friend.

He touched many and he will be missed.

Eugene signed off his emails in recent years with the same sentiment, Carpe Diem

Read the report from CBC here.