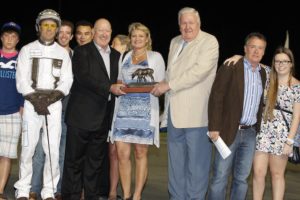 Born in New Liskeard, Ontario in 1933, Dr. Brown graduated from the Ontario Veterinary College in 1957 with a Doctor of Veterinary Medicine and Veterinary Surgeon degree.

In 1958, Dr. Brown became farm manager and veterinarian for Elgin and Ted Armstrong’s ABC Farms and would eventually become General Manager, President and Chairman of the Board of the world-class breeding facility in Inglewood, Ont. He retired from the Armstrong Board in 2005 after nearly 47 years.

In 1981, Dr. Brown’s Fan Hanover brought him great success when she became the first and only filly to win the Little Brown Jug. Fan Hanover was named Harness Horse of the Year and her legacy is honoured each year with the Fan Hanover Stakes at Woodbine Mohawk Park.

In 1985, Dr. Brown was elected to the board of the Ontario Jockey Club (now Woodbine Entertainment) and spent most of his term as chair of the Standardbred committee. Dr. Brown retired from the board in 2009.

As per Dr. Brown’s wishes, there will be no funeral service.

Woodbine extends its condolences to the family and friends of Dr. J. Glen Brown.