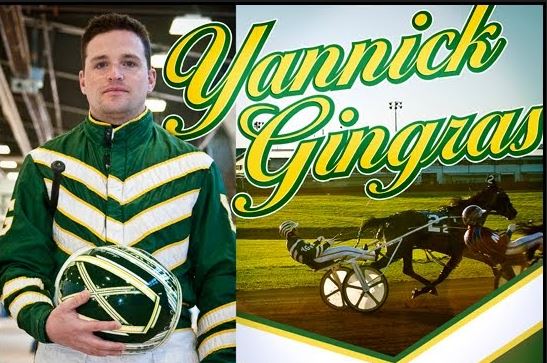 Derick GiwnerMar 11, 2020, Interview a year ago but worth quoting.

Ken Weingartner/USTAYannick Gingras had 108 horses start in 2019 with his name down as owner.

Yannick Gingras has been a mainstay atop the driver standings in Harness Racing for over a decade and lately, he has been dipping his feet deeper into a different aspect of the sport – ownership.

Since he began his career as a driver in 1998, Gingras has always owned horses in some capacity, but his first experience as an owner came in 1992 when he was just 13 years old. “I’m sure my dad paid for that one,” joked Gingras.

For Gingras, his high point in terms of starters came back in 2003 when 188 horses with his name on the program went behind the gate. That number dipped then rose, then declined again from 2014 to 2018 when he averaged just 39 starters per year.

In the Fall of 2018, the 40-year-old made a conscious decision to further invest in the sport.

“I had some money in the stock market and it was going up and down; just doing about the same. I talked to (owner) Mark Weaver about taking some money out and buying some horses with his group, wherewith certain price ranges of horses, I would automatically own a percentage,” said Gingras. “It really wasn’t working for them to include me on all of them, but they said if I could find some horses they would come in. It was just hard to find horses that worked for Ronnie (Burke, trainer) and I’ve had some success in the past with trainer Ed Gannon, so I took some money out of the market and started buying a couple here and there with the intent on growing it little by little.

“It was a really good year last year considering it was the first time I did it. It probably wasn’t a 100% return, but I got about a 75% return, and that is being really conservative on the price of the horses, how much I paid for them and their value now. I opened a different account and I just want to keep track of it to see if I can grow it and be profitable.

Mostly with longtime partners Gannon and Frank Canzone, Gingras had a solid year in 2019 as co-owner, compiling a 108-21-19-17 record and seeing his horses earned $289,418. In just 22 starts this year his horses have done even better, racking up six wins and over $75,000 earned in just two months of action.

“I partnered up with Frank Canzone on IMF, we go back to 2001 owning horses. I think we paid $40,000 or $43,000 and right away she made $100,000 in four or five months in races like the SOA series at Yonkers,” said Gingras. “Unfortunately she passed away recently. She coliced and we had to put her to sleep. It was just a bad situation. But you have ups and downs. Then I got Warrior One, who I think is a really nice horse. You just try to have more good luck than bad luck.”

Gingras’ relationship with Ed Gannon began about 10 years ago with the classy trotter Looking Hanover. The driver recalled making an offer to Gannon to outright purchase the horse only to be told he had to ask his wife. “I waited for a half-hour and told my buddy to offer him more. He said it was a nice offer but he still had to ask his wife. So I was bidding against myself,” said Gingras, who eventually settled on a 50% share of Looking Hanover and got to enjoy watching and driving him to over a $1 million career.

While Gingras admits he really enjoys owning horses, he has to walk a bit of a tightrope because he makes his living as a catch-driver. As the first-call driver for trainer Ron Burke, who has horses in a wide variety of classes at many tracks, Gingras can’t afford too many conflicts.

“Ronnie jokes around all the time, saying, ‘Are you an owner or are you a driver?’ But I don’t have that many horses, maybe five or six right now,” said Gingras. “Part of the reason Warrior One went with Ronnie is that I figured there would be less conflict. Of course, I would like to have them all with Ronnie. Most of the time when I buy one I ask him if he wants to train it, except for the ones I buy with Ed because he trains them.

“Frank (Canzone) is very understanding that way. If I know Ronnie is going to have a good horse in that I need to drive that day, we won’t put ours in the box or we’ll race them somewhere else. Frank understands that my number one business is to drive horses not own them. We have a good relationship and that makes it a lot easier.”

Gingras, who trained a stable in the late 1990s and early part of this century, clearly has a keen eye for picking the right horses. Over the past decade, his stable has clicked at over a 23% win rate, which is even higher than his 17.6% track record as a driver.

“If they don’t win I sell them,” said Gingras bluntly. “I’m the same way as a driver as I am as an owner. I hate losing. I put them in classes where I think they will be good. If you look at the horses I’ve owned over the years, I guarantee you that not many have been 20-1 or above. If I’m going to lose a drive from somebody else, I’d like my horse to at least have a chance.“

One sector of the sport where you won’t see Gingras’ name on the program is with younger horses. Since Gingras must drive the horses he owns by rule, the possibility of being forced to pick off the best horse in a division to drive his own is too risky of a proposition.

With north of 7,450 career wins as a driver, Gingras knows his way to the winner’s circle and appreciates the success he’s had in the sport, but he admits that the owner experience is completely different.

“I enjoy it,” said Gingras. “It is a different feeling winning with the one you own versus one that you just drive. “