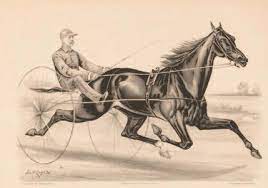 The History of the Standardbred

In 1879, the National Association of Trotting Horse Breeders agreed upon standards to define horses eligible to the Trotting Register, started in 1867 by John H. Wallace, to record pedigrees of trotting horses. One of the rules stated that a stallion was required to trot a mile in two minutes and thirty seconds or better, or 2:35 if hitched to a wagon.

After years of debate over what to name the new breed of trotting horse, the high standards required for registry led to the name we know today: Standardbred.

All Standardbreds trace their ancestry through direct male line to the imported stallion Messenger, an English Thoroughbred who was brought to America in 1788. The modern Standardbred owes its existence to a rather homely grandson of Messenger named Hambletonian.

The story of Hambletonian is a fascinating and well documented one, and set the precedent for this breed being one for ”everyman” and not just a wealthy person’s sport. Hambletonian was bought as a foal by his caretaker, an illiterate hired hand named Rysdyk, and eventually made his owner a fortune.

Hambletonian’s sons and daughters were the first to meet the standards of the new trotting breed, including Dexter, the horse you see on every antique weathervane, and Lady Suffolk, the “old gray mare who ain’t what she used to be”.

Canadian influence was strong in the new Standardbred, with the emergence of sires like Pilot, Pliot Jr., and the early pacers which were brought out of Canada like Copperbottom, founder of the Hal family.

In 1881, the first World Champion was a pacer of the Hal family, and the most prestigious pacing race in the United States, the Little Brown Jug, bears his name. Originally denigrated as “bush-bred” and considered a poor man’s horse, today’s pacer is making many people rich.

Canadians have gained international recognition in the sport at all levels. John Campbell, Ron and Keith Waples, Michel Lachance and Bill O’Donnell are legends in the sport and are all Canadians. Armstrong Bros. of Inglewood, Ontario, is annually one of the top three breeding farms in North America, and horses bearing the “Armbro” prefix have won virtually every major stakes race.

The award of excellence in Canadian racing today is the O’Brien Award, named after the late, great Maritime-born horseman, Joe O’Brien. At the conclusion of each racing year, voters from across the country make their selections of the horses they feel deserve this honour, as well as the Horse, Trainer, Driver and Broodmare Of The Year. The winners are announced each year at the O’Brien Awards, hosted by Standardbred Canada.

Ontario Horse Racing Industry
There are 18 racetracks in the Province of Ontario. Of these tracks, 15 are Standardbred; one is Thoroughbred; one is Thoroughbred and Standardbred combined, and the other is Quarter-horse. Ontario has more races dates than any other jurisdiction in North America. Horse racing is a year round sport, with both live racing in the Province and simulcast racing brought in from other jurisdictions.

Horse Racing is an important agricultural industry which generates significant employment, particularly in rural Ontario, with economic benefits to the overall provincial economy. The horse racing industry employs Ontarians in the equivalent of 30,000 full time jobs. The industry spends over $1.2 billion a year and is Ontario’s third largest agricultural industry. It is also part of the gaming sector, competing with government-operated lotteries and sports betting and government-sanctioned casinos and charitable gaming.

The Ontario Sires Stakes Program
To be eligible to the Ontario Sires Stakes Program, foals must have been sired by a stallion standing in Ontario and registered with the program. These stallions must either be owned or leased by an Ontario resident. The number and quality of sires standing in Ontario has improved considerably and has led to the development of breeding establishments which are now competitive on a world class level.

The Ontario Standardbred Sires Stakes program is recognized as the leading breed program in North America. Its success is evident by the demand for Ontario sired Standardbred horses both inside the Province and in other jurisdictions.

Eligibility to the Ontario Sires Stakes is restricted to progeny of stallions standing in the Province and registered with the Ontario Sires Stakes. Yearlings must then be nominated by May 15th of their yearling year and sustained to race either as two year olds or three year olds. Nominations and sustaining fees are collected and distributed together with the Horse Improvement Program funds in the form of purses.