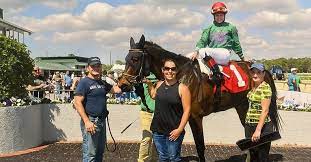 The Ontario-bred three-year-old Full Screen won his maiden on the grass on Feb. 26 at Tampa Bay Downs at 28-to-1.

Julie Belhumeur can hardly wait to get her 2022 Woodbine season underway. In the meantime, FULL SCREEN, owned by NIDEL CHARFI and trained by BELHUMEUR, lit up the tote board when he won his maiden on the grass at Tampa Bay Downs on Feb. 26.

The Ontario-bred 3-year-old by Big Screen – Lyndenshire by Langfuhr was making just his second career start following an eighth-place finish in his debut at Woodbine on November 21. Off the layoff and making his grass debut in a 1 1/16 mile race for $32,000 maiden claiming, Full Screen battled on the pace and then raced greenly as he did not corner well on the last turn, but jockey Skyler Spanabel kept the gelding going and he won by a head. His Beyer Figure was 53 for a time of 1:44.59.

“I know he’s a good horse and the race came up easier than I expected so I thought he had a shot,” said Belhumeur. “But the plan was to come off the pace so when I saw him take the lead I was just praying he still [would] get it done. He does love to run and he is talented but is still very immature.”

Full Screen, bred by Dr. John Brown’s Spring Farm which stands Big Screen, was bought at the CTHS Ontario Canadian Premier sale in 2020 for $9,500. The gelding is groomed by Sophie St. Pierre.

Charfa, a former jockey in Tunisia, has a small farm in Quebec and Full Screen is his only racehorse. He broke Full Screen after buying him at auction and visits and gallops the gelding at Belhumeur’s barn at Woodbine often.

Belhumeur is excited to get her 2022 Woodbine season underway after a 2021 campaign that was cut short by COVID-19 and slowed by some injuries to her horses.

“Knock on wood! Excited to get back to Woodbine and we are even coming back a bit earlier, in March this year for the first time. We want the horses to be settled and ready as we found races for all the older horses in the first book. And our babies are coming along well, too.”

Belhumeur is originally from Montreal and has trained a small stable since 2008.

Sam-Son Farms’ homebred COUNT AGAIN is one of the top turf horses on the west coast and on Mar. 5 the 7-year-old won a thrilling edition of the Grade 1 Frank Kilroe Mile (G1).  Also owned by Agave Racing and trained by Phil D’Amato, Count Again ran the mile on turf in 1:33.24 for a 103 Beyer Figure.

With Victor Espinoza and Beyond Brilliant setting fast early fractions, Count Again had two horses beaten while about eight lengths off the lead at the rail heading to the far turn. Straightening for home, French native Prat angled out three deep and with six lengths to make up in the final furlong was able to overhaul UK-based Jamie Spencer and Space Traveller.

“I definitely loved the fractions (they) were running,” said D’Amato, who bagged his second stakes win on the day. “I was just hoping we would get loose and to be able to come with a run. This horse like to just come with a big, wide, late run and were stuck in there, but this is why this guy (Prat) is the top jock…He cut the turn, angled out and got the job done at the wire.

“(Count Again is) just one of those dream kind of horses. You know if you have dead aim at the top of the lane with him, he’s going to give you his late kick pretty much every time. He’s just a fresh, happy horse now and Flavien fits him well.”

CANELITO, a Queen’s Plate eligible, won a starter/optional claiming race at Gulfstream for Lanni Bloodstock and trainer Jonathan Thomas, his second straight win on the Gulfstream Tapeta surface. The 3-year-old chestnut gelding by Overanalyze – Woods Bay by Mr. Greeley had won his maiden by seven lengths on Jan. 1 for a $16,000 claiming price. He came back with this win while not offered for the $16,000 claiming price, winning by a length in 1:44.44 for a 73 Beyer Figure. Canelito was bred by the late Bill Graham.

TONY CAMILLERI (owns Malta Manors with Shirley Camilleri) had a winner at Gulfstream on Mar. 6 when his new claim EAGLE CHIEF won his maiden on the grass for trainer Bill Tharrenos. Eagle Chief is by Into Mischief and he was winning for $25,000 claiming.

ALLEGORICAL, an Ontario-bred by Giant Gizmo – Champagne Dynasty by Pulpit, posted a 76 Beyer Figure in his second outing of 2022 when runner-up in a maiden allowance at Gulfstream on Mar. 4. The chestnut gelding is Queen’s Plate eligible and he was just a length behind the well-bred Tyson, a first-time starter from the Todd Pletcher barn. Brian O’Leary owns and co-bred Allegorical with Michael C. Byrne. Mark Casse trains.