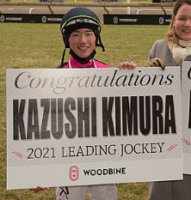 Starting young: Kazushi on a horse, pictured with his father who runs a training operation in Japan. (courtesy Kazushi Kimura)

The distance between Hokkaido, Japan, and the winner’s circle at Woodbine Racetrack is approximately 9,461 kilometres, give or take a few horse lengths.

These days, Kazushi Kimura might be what seems a world away from Canada’s Showplace of Racing, but his deep connection and affinity for the world-class horse racing facility, he shared, has never felt stronger.

There is a genuine sense of joy in the 22-year-old jockey’s voice, the product of a hugely successful season in the saddle at Woodbine, home to one of Thoroughbred racing’s most competitive riding colonies.

His 2021 Woodbine campaign produced a wealth of impressive numbers, punctuated by his leading 138 wins at the meet, putting him 54 victories ahead of nearest rival. He also topped the earnings chart with $6,360,203.

Soon after the curtain closed on the meet, Kimura headed back to his native land. Home to over 5.2 million people, Hokkaido, the northernmost of the four main islands of Japan, is bordered by the Sea of Japan (East Sea) to the west, the Sea of Okhotsk to the north, and the Pacific Ocean to the east and south.

It’s the place where his horse racing journey began and where his family still resides.

In between watching movies, listening to music and grabbing a few naps, the 16-plus hour flight from Toronto to Hokkaido afforded Kimura plenty of time to reflect on the most impressive year of his career to date.

The more he recalled those moments, the bigger his smile grew.

“I had so many great memories with many trainers, owners, and horses. I’m very grateful for them.”

From catching up with his relatives, to seeing old friends, to enjoying home-cooked meals, Kimura is making the most of his time in Hokkaido, the place where his parents run a horse training centre.

“I’ve been spending great time with friends and family, and I’m also enjoying Japanese foods. I’ve also been hanging out with friends, catching up on everything that is going on in their lives.”

Every year he returns to Japan, Kimura has new and exciting chapters to share with those he’s closest to.

Questions about Woodbine have become commonplace.

“Everybody wants to know about Woodbine and that’s why I am always happy to answer them. Woodbine has so many nice people, it’s a beautiful track and location with high-quality racing.”

It didn’t take long for Kimura, who didn’t speak any English when he arrived on the Woodbine backstretch, to realize any of that.

The man who had graduated from Japan’s jockeys’ academy joined the Woodbine jockey colony as a 19-year-old apprentice in 2018 and made a strong first impression. He finished his first Woodbine campaign sixth in the standings with 89 wins and his mounts totaled more than $2.3 million in earnings. His first victory came aboard 70-1 longshot Tornado Cat, and his first stakes win came aboard Speedy Soul in the 2018 Muskoka Stakes.

Kimura earned Eclipse Award honours as North America’s outstanding apprentice in 2019, and also won the Sovereign Award equivalent in both 2018 and 2019.

One of his most treasured memories was riding for Queen Elizabeth II when he teamed with Magnetic Charm to finish second in the 2019 edition of the Grade 2 Canadian Stakes.

Last year, Kimura won eight stakes at the Toronto oval, including Corelli in the Grade 3 Singspiel Stakes, Our Secret Agent in the Grade 3 Hendrie Stakes, Frosted Over in the Grade 3 Ontario Derby, and Swinging Mandy in the Victorian Queen Stakes.

Teaming with Gretzky the Great, a bay son of Nyquist bred by Anderson Farms Ontario, Kimura guided the Mark Casse trainee to a thrilling score in the Greenwood Stakes, set at seven furlongs on the E.P. Taylor Turf Course.

“I would say that win was the top one for me last year. That was a perfect race.”

Still at his family’s house in Hokkaido, Kimura will soon head back to Canada and Woodbine, places that have very much come to feel like home.

There is no hint of complacency in his demeanor as he readies to begin defence of his crown.

No doubt he’s ready for that challenge along with the other goals he’s lined up for 2022.

“I’m always thinking about horse racing. I would like to get over 200 wins and winning a few Grade 1 races. Also, I want to win the Queen’s Plate. Of course, I need first place once again, which means leading jockey.”

One of his four tattoos.

If he were to achieve those objectives, Kimura would, at some point, likely add a tattoo or two to his current collection of ink.

His tattoos, now standing at four, each symbolize something different, yet are connected on some level.

“I have one on the left wrist that reminds me to think positive, to always have a positive mind. The second one is that everything happens for a reason, but like the first one, it is a reminder to keep a positive outlook. The third one is inside of my upper arm, which I call infinity luck. It’s an infinity mark and horseshoe and four-leaf clover. The last one is sunshine and inside that is a human hand and horse leg, which is on my right shoulder. Sunshine means victory, passion and vitality. That’s everything I need with horses.”

Before he considers adding more art, Kimura will put his energy into stamping himself as the top rider at Woodbine for the second straight year.

Nearly 10,000 kilometres away, he’s already been envisioning the walk to the place he visited 138 times last year, the picture-perfect spot that is never far from his thoughts.

“I dream that I will be champion jockey again and win a few Grade 1 races. Unfortunately, that didn’t come true last year, but I’m wishing for that in 2022. I’m going to do my best to achieve all of that in a place that feels just like home for me.”