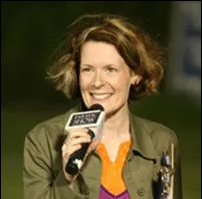 Kelly is an award-winning, internationally renowned marketing professional. She cut her teeth in the equine industry. She is an exceptional storyteller with a flair for creative problem-solving.

Her capacity to engage an audience also translates into her work as a broadcaster, teacher, host and speaker in the fields of marketing, public relations, advertising and communications.

Kelly Spencer, long admired as one of the most innovative promoters of harness racing in this country, is the newest member of the Ontario Standardbred Adoption Society’s Board of Directors.For 22 years Kelly led the marketing team at Elmira and Grand River Raceways and last year she created her own communications agency, True Nature Communications, with TheStable.ca and Grand River being two of her premier clients.A recipient of the Lloyd Chisholm and the Golden Pen awards, Kelly has served on numerous industry boards and committees over the years. She joins Jim Evans, Bill O’Donnell, Ian Fleming and Heather MacKay on the OSAS board.“We’re thrilled that Kelly has agreed to join our team,” noted OSAS’s administrator Joanne Colville. “She’s great to work with and we look forward to her input on our initiatives going forward.”

After 22 years leading the marketing efforts for Grand River Raceway and its predecessor, Elmira Raceway, Kelly Spencer is stepping aside to develop her own communications agency.

Spencer joined Elmira Raceway in 1996 as the Marketing & Communications Manager. She was part of the small management team which introduced the simulcasting of the track’s signal in 1997, the creation of the Battle of Waterloo as part of the track’s annual Industry Day event, and the establishment of Grand River Raceway in 2003.

Both tracks have won numerous awards for innovation during her tenure, including the Lloyd Chisholm Award (presented by the Ontario Sires Stakes, for meritorious service to the industry) and an esteemed Business Excellence win in 2016 from the Greater Kitchener Waterloo Chamber of Commerce, recognizing Grand River Raceway’s contribution to the local tourism and hospitality industry.

Spencer was also an individual recipient of the Lloyd Chisholm Award and of the Golden Pen Award, awarded by the Standardbred Media and Marketing Association (SMMA) for outstanding contributions to harness racing publicity and marketing.

“I am immensely proud of the work we’ve accomplished at both Elmira Raceway and Grand River Raceway,” said Spencer.

“We’re often praised within the industry for being innovative and leaders in guest service. But there are a lot of moving parts that foster the work culture which makes those achievements possible: the leadership needs to tolerate the inevitable fumbles that come with earnest efforts to try new things and different approaches,” she said. “Our team has the longstanding backing of our Board of Directors (of the Grand River Agricultural Society) and enduring guidance from former General Manager Dr. Ted Clarke and current Director of Operations Jamie Martin.

“The decision to leave Grand River Raceway has been very difficult to reconcile,” said Spencer. “But it’s really just a matter of mathematics. I have several side projects that I’m really jazzed about and they’re requiring more of my time. I’m at the crossroads of time management and need to deviate from the usual path, otherwise, I’ll always wonder what was around that bend.”

Spencer will continue to work with Grand River Raceway as the track becomes a client of her new venture, True Nature Communications.

“While are disappointed with Kelly’s decision to leave Grand River Raceway, we wish her all the best with her exciting new venture,” said Jamie Martin. “We thank her for her incredible efforts in helping to make Grand River Raceway what it is today, and are pleased to continue working with her as a client of her new agency.”

Spencer’s departure is set for mid-January.

1. How well do you know Spencer? Spot the lie.
Tell me three things about yourself and one of them is a lie.
“I’m an extrovert. I have porridge for breakfast EVERY day and I am a zombie fanatic.”

2. She has a diverse Bucket List
Three things on Spencer’s Bucket List: 1. Hike the Camino de Santiago (750km); 2. Have afternoon tea with Morrissey in an English rose garden on a cloudy day; 3. Finish writing a book.

3. She would pick Super Human Strength as her super power.
“Specifically, the power to Hulk-Out. I grew up watching Lou Ferrigno and used to Hulk-Out whenever I didn’t get my way. My mom was in stitches every time. (I stopped doing that last year.)”

4. Her Kryptonite is…
“Sugar. Always sugar.”

5. She has a secret thing for a Taylor Swift tune.
Asked what song she is embarrassed to admit she likes, Spencer said, “Right now my dirty little secret is Taylor Swift’s Blank Space. I think it’s the warm weather? Don’t judge. Also, anything by the Spice Girls.”