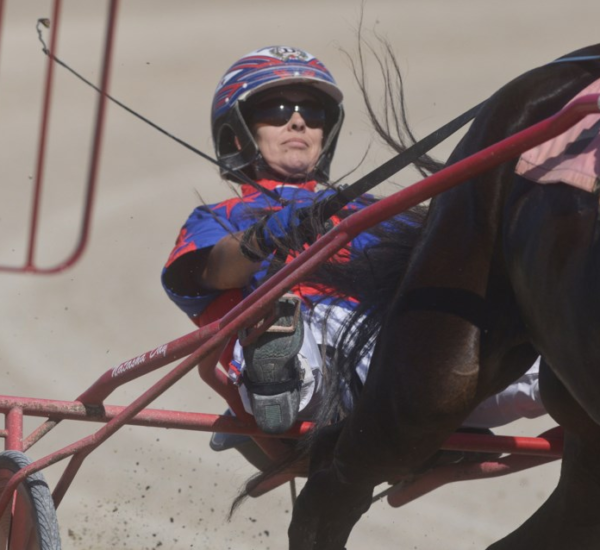 Natasha Day knows she is fighting an uphill battle as one of the few women harness drivers in Ontario.

She’s new, she’s from another country and, most of all, she’s one of the few women drivers in the industry and the only regular on the busy local harness racing scene.

A regular on the B circuit, including Elora’s Grand River Raceway, Day is just hoping for a break that has yet to come in an industry that doesn’t exactly embrace anything new, particularly a woman racing a horse.

“If you’re a girl, you’re a groom,” she said addressing the prevailing stereotype in her thick Australian twang after qualifying a couple of horses on a recent Wednesday afternoon in Grand River.

“People are a little bit shocked when they see you can drive. We had to kind of get people to take notice.”

Have things changed in the four years she’s been driving in Canada and having some success?

“You’d like to think so, but there’s still a lot of ones that are stuck in the dark ages and are very chauvinistic,” she said of the industry, particularly the so-called old guard.

She knows a female trainer who was told to ‘get back in the kitchen and tells another story of an incident in Clinton where someone loudly criticized the fact a woman was driving a racehorse.

Many of the other drivers “are pretty good and treat me as one of them,” she said, although some of the older drivers try and intimidate her on the track.

“They think ‘you’re a little girl, you shouldn’t be out here and it’s always the older guys,” she said. “They will go out of their way in a race just to beat you and play games with you.”

She has raced in over 260 races at various harness tracks this year with about 30 wins. Good but not great. And most of the time those races are on lesser horses and/or at lesser tracks where the prize money is pretty small.

For every big-money race at Mohawk, there are 20 races for a fraction of the prize money in places like Clinton, Hanover, Elora and London, where drivers are usually only paid when they win: 5 percent of the prize money, which when first-place earnings are $1,000 to $3,500, really isn’t that much.

The only way to make it is on many drives and some good horses at good tracks.

Veteran driver Marie Claude Auger is one of the top drivers at Rideau Carleton Raceway in Ottawa, but other than that there are only occasional females in the sulky.

But virtually all of Day’s drives this year, around 265 of them, have come on the smaller tracks.

She credits trainer Beck Geisel, who knows somewhat what Day is going through, with helping her get established in the industry.

Getting rides on good horses at top tracks is a tough nut to crack. Most harness drivers have relationships with the trainers that have most of the best horses.

But Day keeps on trying. Driving is her passion.

“I’ve had a lot of opportunities down there (the United States), but at the end of the day you’re still the second trainer on a horse and I just want to get back driving. That’s why I decided to come up here and start building up the contacts and show them I can do it.”

She will keep trying, driving any and every horse she can.

“You talk to everyone you can and get out on the track and show them what you can do. Nine times out of 10 you drive the worst horse, but you try and finish fourth or fifth if you’re lucky and hope next time you get another chance or a better horse.”

Day grew up in a horse family. Her dad trained and raced them in Queensland, Australia, and she was the only one of seven children that took a keen interest.

But when local tracks started closing up shop, she started bouncing back and forth between Australia and working in barns in New Jersey. Four years ago she decided to make the full-time move to Canada.

“It’s big over there, a lot like here,” she said of the harness scene in Australia. “But with the tracks closing down near where I lived, I decided to move and try something different.

“I pretty much knew no one. One person maybe.”

She cold-called top trainer Richard Moreau and got a job, moving to Cambridge four years ago and starting at the bottom, “cleaning stalls, washing out the water buckets, cleaning harnesses: all the dirty jobs.”

That means a day job for drivers that don’t get regular rides or win regular money.

Day works stalls and exercises horses in the morning, races at a track somewhere in southern Ontario at night, then has to make sure the horses are paddocked at night. It’s a long day and a long week.

“Weekends? I don’t know what weekends are,” she said.

She’s asked if she’s ever had moments where she wondered if it was worth it.

“Every day,” she quipped, before adding “did I say that too loud?”

So what keeps her going?

“Money. Money and the hope that one day you get on that good horse or pick up that one good trainer who will give you a shot and has a stable of horses.”

Getting people’s attention and earning their respect is a long journey. Hard work and success are the only avenues.

“You’ve got to do it 120 percent. You’ve got to go above and beyond and do it until you’re almost dead and then maybe people start taking notice,” Day said.

“You’ve got to let your driving do the talking.”