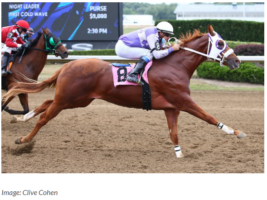 By Ajax Downs
For only the third time in Ajax Downs history, a 2-year-old has been named the track’s Quarter Horse of the Year. FIRST COLD WAVE, who is Ontario bred and sired, was voted 2021’s top horse by the board of directors of the Quarter Racing Owners of Ontario on April 22.

Owned and bred by Robert Bailey of Oakwood, Ontario, First Cold Wave is the only provincially sired and bred juvenile Horse of the Year, following American bred Leanintoit (2011) and American sired/ Ont. bred One Kool Wave (2010).

The impressive-looking First Cold Wave earned 39 QROOI points in 2021, more than any other Ajax Downs starter. The sorrel-coloured gelding also collected the trophy for High Point 2-Year-Old Male horse. He is a son of young stallion Cold Hard Dash, whose first crop of foals raced in 2021. Cold Hard Dash is owned by a syndicate and stands at Iron Horse Reproduction in Port Perry.

Trained by Jason Pascoe, First Cold Wave made his Ajax Downs debut in July following a 10th place finish in his career debut at Remington Park in Oklahoma. He won his maiden in that first start locally under jockey Brian Bell and then finished a close second in the $61,000 Ontario Bred Futurity to Night Leader. First Cold Wave turned the tables on that rival, winning a Trial for the $65,000 Ontario Sires Futurity before taking the final. After a third-place finish in a Trial for the prestigious Alex Picov Futurity, First Cold Wave won a furious battle to the wire, taking the $115,000 Futurity final by a nose.

Produced from the mare Cassies Carver by Wave Carver, First Cold Wave completed his 2021 season with four wins in seven starts and earnings of $98,764 (Cdn.).

First Cold Wave recently returned to racing on April 15, finishing fourth in an allowance race at Remington Park. He is being pointed to that track’s Heritage Place Derby Trials on May 7 and should he qualify, would contest the $250,000 (US) final on May 28.

Ajax Downs racing fans will hopefully get to see the champ for the track’s big 3-year-old races this summer.

The 2022 Ajax Downs Quarter Horse season opens Wednesday, May 11 (first race post time at 1:30 p.m.). Racing will be conducted on Wednesdays, plus one Sunday a month, and there will be a special card on Thanksgiving Monday, October 10.

You can view the entire racing schedule with on-track events here.
Follow Ajax Downs on social media @AjaxDowns (Twitter and Instagram), Facebook and at www.ajaxdowns.com. For more information on how to become an owner or partner in a Quarter Horse contact the QROOI at www.qrooi.com.