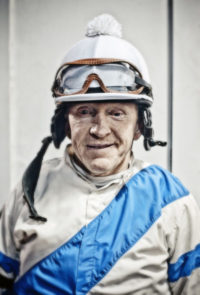 This article is more than 1 year old.

On Jan. 29, 2006, Perry Ouzts was racing at Turfway Park in northern Kentucky on the back of a horse named Finders Chance. He was in second place, traveling at about 40 miles per hour when suddenly the horse collapsed. Perry and the horse hit the ground hard. Hours later, 50-year-old Perry was listening to a doctor tell him he had broken his arm and five vertebrae.

“And he said that my jockey days were over,” Perry recalls. “He said, ‘If you go down one more time, you’ll probably wind up paralyzed.’ Because I did broke it too many times. And I looked him right in the eye, and I said, ‘You know, I’ve been doing this…’ already 30 years, I guess. I said, ‘You can get paralyzed when you’re 18 years old. It ain’t because you’re 50.’ I said, ‘So I’ll let you know when it’s time.’ “

‘We’ll Make A Jockey Out Of You’

Being a jockey is all Perry Ouzts has ever wanted to do. He wasn’t a thrill-seeker or a daredevil as a kid. But he grew up in small-town Arkansas with a gaggle of cousins nearby. One of them, Earlie Fires, became a Hall of Fame jockey in 2001. Most of Earlie’s eight brothers also worked in the horse industry.

One day, fifth grade Perry Ouzts sat at his desk. He was the kid whose feet still couldn’t quite touch the floor. His assignment? Write about what you want to do when you grow up.

“Well, this is the first year when my cousin Earlie — when he started riding. This is 1965.” Perry says. “And I got to hear the stories about him and stuff, and I got to thinking, ‘Well, that would be a really cool job,’ because I liked horses already. I was small. And that’s what I wrote about: I wanted to be a jockey.

“And then a couple of years went by, and I never thought about it again. And then, I think I was 17. I was too young to get a job in the factory or anything. And my cousins called me up. And I think it was like a week later after I graduated. And they said, ‘Hey, you wanna come up to Chicago? You know, we’ll teach you how to get on horses and make a jockey out of you.’ I jumped on that, and I was there the next day.”

Perry arrived at Arlington Park in Chicago very green. Most of his horse experience came back in Arkansas from his pet Shetland pony named Smokey.

He started mucking stalls and walking horses around the barns. He graduated to galloping thoroughbreds. His horsemanship was improving; his confidence too. Maybe in a few months he would be racing.

“I was nervous because I didn’t know what was gonna happen. Because the Vietnam War was still going on,” Perry says. “They always said the little guys had to be the tunnel rats over there in Vietnam, and I didn’t want to do that. You know, go in there with nothing but a flashlight and a pistol. And they said rats are as big as dogs over there.

“So I was fretting every day until I had to go down there to get my physical. Well, when I jumped on the scales, I weighed 95 pounds. And the guy looked at me and laughed and said, ‘We got backpacks that weigh more than you do.’ “

Too small for a soldier, but for a jockey? He was perfect: 5-foot-1, strong and wiry. Perry moved from Chicago to Hot Springs, Arkansas, following his cousins from track to track.

In the spring of 1973, he was ready to race. He headed for a small track near Cincinnati then called Beulah Park. Perry’s second day of racing — April 2, 1973 — was biting cold, gray, and rainy. Perry loaded into the starting gate on a horse named Rablu.

“The thing that I can remember most was when I crossed the finish line, I kinda looked around both sides, and there’s nobody around,” Perry says. “I said, ‘I think I just won!’ And it was like slow motion, you know. It was happening in slow motion, not in real life. And I thought that was a pretty good thrill.”

“I think I rode nine [races] the second day and won two — the very second day I rode,” Perry says. “So, I got to thinking this was easy. ‘I’m going to be another Willie Shoemaker. This job’s really easy.’ And the meet went on, and I actually won a lot of races. I was leading rider the first meet I ever rode at Beulah Park.

“I look back at it now — I couldn’t spell ‘horse,’  much rather be a jockey. But I got lucky. Got on a bunch of good horses, and that’s the way it went.”

Perry Ouzts is a good jockey. And it’s not just luck. It’s his dedication. True story: His youngest son was born at 10 a.m., and he was at the track by 12:30 to run races. His wife works in the barns at racetracks around Cincinnati where they live. So, she gets it.

Another true story: Perry eats the same thing every day, so he can maintain his ideal jockey weight: coffee and a roll in the morning, half a sandwich at lunch and a meat and potatoes dinner. He is at the barns ready to exercise horses before sunrise every morning. Jockeys don’t get paid for that morning work. But showing up every day helps you connect with trainers and earn mounts on solid, fast horses come race time.

Still, dedication doesn’t guarantee longevity. Not in this sport. Perry learned that quickly.

‘Just Don’t Think About It’

It was May of 1977, long before Perry had started a family. He was living with his cousin, Jackie Fires, who was Earlie’s younger brother. Perry and Jackie had been best friends, ever since their childhoods in Arkansas. One day, Perry finished his morning workouts before Jackie and headed home.

“About an hour later, they called me, and they said that Jackie had got hurt. And they said, ‘And it’s pretty bad,’ ” Perry recalls. “They said, ‘You need to get down here to the track.’ So I went down, and he was still in the ambulance. And he said he couldn’t feel his legs, you know.”

Twenty-one-year-old Jackie had been galloping his last horse of the morning. Nothing about this horse indicated it was weak or clumsy. But racehorses can be unpredictable and uncoordinated, like a teenager who hasn’t quite grown into their body. For some reason, that morning Jackie’s horse clipped its front legs while galloping. Both the horse and Perry’s cousin fell. The horse rolled over Jackie.

“And we went to the hospital, and I rode in the ambulance with him. They did X-rays and all that and said, ‘Yeah, he severed his spinal cord,’ ” Perry recalls. “And they said they’re gonna have to operate on him. And I had to call his mom. And he had fluid building around his heart. You know, and he’s thinking he’s gonna die.

“So, he got the operation. It went pretty good, and he made it through. He said, ‘You know, go on about your business and do your job. Don’t worry about it. You know, it can happen to anybody.’ He said, ‘Just don’t think about it.’ You know, so he was that kind of guy.”

Blocking Out The Danger

It sounds impossible. How do you watch someone you love become paralyzed and mentally set it aside? But the next morning, Perry woke up and went to the track to exercise horses.

“You have to block out the danger. You’ve got to be able to do that,” Perry says. “I mean, you do this some seven, eight, nine times a day. You know, if you sit around and thought about it, you couldn’t ride. There’s no way.

“And some jockeys when they get hurt, they can’t block that out anymore. Through the years, I’ve been lucky that I can just tunnel it right out. I mean, I’ve been in a race before with a guy, running head to head coming down the stretch. He went down in a 12-horse field. 10 of them run over him — killed him right there on the spot. I went and rode the next day.”

“You have to block out the danger. … You do this some seven, eight, nine times a day. If you sit around and thought about it, you couldn’t ride. There’s no way.”

Perry’s not callous. He just really loves his job. To keep at it, he survives the trauma. When injured, he asks: “How soon can I get back?” And there have been a lot of injuries: at least 40 broken bones, including 11 vertebrae. During one race, his horse made a sudden move, and Perry slid off. His horse kicked his left eye socket, shattering it. Actually, he’s shattered that left eye socket twice.

And this past summer he was heading toward the starting gate when his horse’s bridle broke. The horse took off and — with nothing to hold onto — Perry slammed to the ground, tearing his rotator cuff.

“It hurts harder now,” Perry says. “I mean, it’s a lot — the pain is a lot more intense, it seems like, now than it was back then. I think when you’re young, you’re kind of like — your bones are elastic. You know, you’re just kind of like a rubber ball when you hit the ground, you just bounce around. But yeah, when you hit the ground now, it hurts.”

So why not retire? With 51,218 races, the only jockey with more starts is Russell Baze, a now-retired jockey out of California who started more than 53,000 times. Perry knows at his current rate he doesn’t have enough years in him to pass Baze. So he had to set other goals.

He did it aboard a horse named Emmy’s Candy in September 2018 — and the wins are still coming.

“And even after 47 years, I still get that same thrill,” Perry says. “Even, like, the first day that I started riding. I get that thrill every time I win. I mean, it’s just unbelievable.”

When someone suggests retirement, he remembers what one of America’s most celebrated jockeys once told him.

“Pat Day was telling me, he said, ‘When you don’t get that thrill, he said that’s when it’s time to quit.’ “

For most jockeys, an impressive career lasts 20, maybe 30 years. Injury or burnout forces many to call it quits. Perry Ouzts is in his 47th year of racing. It will likely be his age that finally steals that thrill of racing from him. He’ll turn 66 years old in July, old enough to start collecting social security. When he does stop racing, Perry’s not sure what he’ll do next. He’s never given retirement much thought.

Perry Wayne Ouzts (born July 7, 1954, in Lepanto, Arkansas) is a jockey in Thoroughbred horse racing whose 7, 065 wins through March 30, 2020, ranks him seventh all-time among jockeys in North America.[1] Of the multitude of horses he has ridden, Ouzts has had just nine with career earnings of $100,000 or more.

Perry Ouzts’ career was the subject of the documentary film titled “Ironman Perry Ouzts” that won the 2015 Media Eclipse Award for Television-Feature documentary. [4]