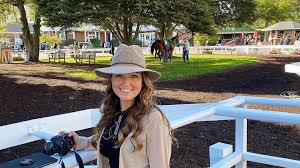 Ashley Mailloux first fell in love with horse racing as a toddler while attending the races with her parents at Fort Erie Race Track. She soon found herself travelling to different tracks across North America and so far, has crossed more than forty racetracks off her list. Originally from Buffalo, New York, Ashley attended Transylvania University and completed a degree in Mathematics, and in May 2018, she graduated with a Master of Science in Applied Mathematics from the University of Dayton. During that time, she assisted several trainers who shipped into both Churchill and Keeneland and was featured as a guest handicapper for several handicapping events.

Over the last year and a half, she’s worked for the Stronach Group, covering events such as the Preakness Stakes and the Pegasus World Cup. She’s also worked for the Meadowlands, conducting interviews on major stakes days and joined TVG for the 2019 Maryland Million. Ashley joined the Horse Racing Radio Network team in 2019 and covered the Queen’s Plate and the 2019 Breeders’ Cup at Santa Anita.

LOUISVILLE, Ky. – It was at Saratoga that Mike Penna first discovered Buffalo-based racing broadcaster and analyst Ashley Mailloux when she was only 13 years old.

In 2008, a curious Mailloux approached the Horse Racing Radio Network founder and president as he set up shop near the betting windows across from the paddock, readying to broadcast the day’s races.

After satisfying her curiosity, Mailloux started spouting facts and figures to Penna about the Spa’s various racing colonies.

“You wouldn’t believe at that age, her knowledge of the horses, jockeys and trainers at Saratoga. She just blew us away,” Penna said.

Little did Penna know that she would blossom into a talent who has entered the industry in many different roles, including handicapper, paddock reporter and trackside interviewer. On Saturday, the Buffalo native will be part of an HRRN team that will nationally broadcast the 146th Kentucky Derby as part of the undercard coverage from 4-5:30 p.m.
She was introduced to horse racing by her family at a young age. Her Aunt Susie was a caretaker and groom at the Saratoga harness track. Her father, Jacques, brought her to the races and taught her to read the Daily Racing Form Form. “There became a point where I was begging to go to the track,” said Mailloux. “The older I got, the more questions I asked. Once you get to an age where you start looking things up for yourself, you try to understand what every number means.”
She got her first on-camera appearance at Fort Erie Race Track when local owner Gerry Catalano urged the racing office to use her.

“He told them ‘This girl likes to share her selections and write a tip sheet,’” said Mailloux, now 26. “On the first day of racing in 2018, they threw me on camera for a race and from there, it became real.”

In her first Derby assignment for HRRN, she will perform analysis remotely from her home in Cheektowaga.

“Her knowledge of the game is superior, going back to when we first met. She has grown into a really good broadcaster,” Penna said. “Her knowledge helps her a lot when she is doing the shows with us.”

In November, she was part of the HRRN team that won a media Eclipse Award for their work at the Breeders’ Cup at Santa Anita. Penna cited where her knowledge made a difference during the broadcast.

“After using her at the 2019 Queen’s Plate as a paddock reporter and interviewer trackside, she did such a nice job (that) I asked her to join us for the Breeders’ Cup,” Penna said. “Man, she picked up on it like a pro. She was so good at describing the horses and painting that picture for listeners on radio.”

Penna was impressed how easily Mailloux could transition from analyst to interviewer during a broadcast.

“The fact that she knows so many of the players and asked really good questions in the interviews,” Penna said. “That probably impressed me the most, she’s come a long way in a short time.”
Mailloux got her education in Lexington, Ky., at Transylvania University, where she earned a B.S. in mathematics and went on to obtain her master’s in applied mathematics with a concentration in statistics at the University of Dayton.
By day, she puts those degrees to work, tending to her full-time job as a model valuation analyst at a regional financial institution. She performs her racing duties on her own time during evenings and weekends.

She makes a point to balance her racing activities so they don’t interfere with her day job, recognizing that her passion is a healthy distraction that gives her another avenue to display her talents.

The background in math is a benefit when putting her handicapping knowledge to work. She continues to write daily tip sheets at Fort Erie and is a frequent guest on America’s Best Racing handicapping shows.

“It’s very strange to find someone in their 20s who not only loves racing and is passionate and extremely intelligent about it, but is willing to work hard to get her work done,” said Dan Tordjman, ABR’s manager of partnerships and sponsorships. “She’s always prepared for the shows and absolutely does a great job.”

With the on-camera exposure at Fort Erie, Mailloux started to get noticed, specifically by The Stronach Group, leading to gigs at the Maryland Million, the 2019 Preakness and the 2020 Pegasus World Cup.
“The prep work for it always is interesting, you have to do your research and you want to ask questions that are not standard or something different,” Mailloux said. “It’s always tricky to find something different to ask in an interview.”

Her most memorable interviews came at the Pegasus World Cup at Gulfstream Park in January, a first-time assignment during which she was able to interview Kent Sweezey, who won his first graded stakes on the undercard.

“Obviously he was really excited Phat Man won the Fred Hooper, but that was a different side of things to interview someone that was going through this experience for the first time,” Mailloux said. “Another one that stood out was the same day with Shug McGaughey, who won the Inside Information Stakes. It was interesting since he had trained Inside Information, the horse the race was named after, so we talked a lot about that as well.”

On Thursday night, she was part of ABR’s Derby preview show “Betting After Dark,” co-hosting with ESPN Radio’s Anita Marks to review this year’s Derby field. In the opening of the last broadcast, Marks told Mailloux that she was getting rave reviews from her constituents.
“A number of people reached out to me after the show,” Marks said. “They asked me ‘Who’s that girl, she’s amazing. She’s like a phenom. How does she know so much about horse racing?’ So you have quite a fan club out there.”

When asked about this year’s Derby, Mailloux is keen about the favorite who looms large over the field of 18.

“In my opinion, Tiz the Law will be tough to beat,” she said. “He’s accomplished the most out of all the three-year-olds and he looked spectacular in both the Belmont and Travers, especially at Saratoga.”

She also offered a potential longshot who could possibly shake things up in this year’s Run for the Roses.

“Looking at the others, Ny Traffic is a horse that I’ve been keeping an eye on since his win at Gulfstream Park this winter and I will be using him on my tickets. He’s been picking up minor awards this year and even though he finished second in the Haskell, I thought it was a huge effort from him,” she said.

Mathematician by day, handicapper by night.

She’s a rising star in the game and her future is bright.

Gene Kershner is the turf writer for The Buffalo News, a member of the National Turf Writers and Broadcasters Association and tweets @EquiSpace.