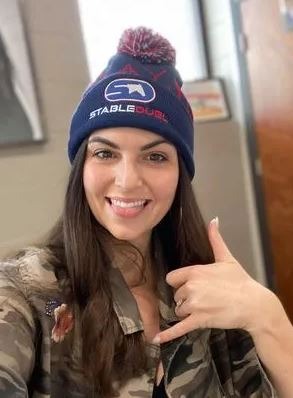 Thanks to Gate to Wire and Veronica Gizuk

If you’re on Twitter, you most likely know who Bri Mott is known as the “hype chick” of StableDuel. Bri is the Senior Director of Marketing.

Bri first became involved in racing in 2009 when she worked as a groom in Ashford Stud’s foaling division. Before working at Ashford, Bri had never watched a race or been to the track. Her first race was at Keeneland when she was 20 years old. After watching her first race, Bri never left the industry. She’s worked as a vet assistant at Hagyard, been a hot-walker at Saratoga, groomed at sales and worked for team Valor for six years. In 2012 Bri started up her own business called “Fashion at the Races” to attract new fans to the sport. With her business quickly taking off, it became known internationally, taking Bri across the world to racecourses like Happy Valley, Sha Tin, Moonee Valley, Flemington, Mornington and Kenilworth. Just over a year ago, Bri sold Fashion at the Races, since then focusing on StableDuel.

“The team has worked hard to create something that is both innovative and engaging to bring new fans to the sport,” said Mott. StableDuel is a game that combines fantasy sports and traditional handicapping with a fun twist. StableDuel offers daily paid entry contests to their players. As a player, you can have your own virtual stable within the app to sense a feeling of ownership. Players must select a stable of horses from a specific race card within the salary cap. The horses are assigned a price or salary based on morning-line odds. Players earn points when a horse they’ve chosen finishes in the top five, based on the order of finish and winning or losing. Along with daily contests, StableDuel has an annual leaderboard competition with end-of-the-year contests.

StableDuel currently has partnerships with more than 20 racetracks across the United States. They are currently working on getting the app up and running for Canada as well. To download for IOS or Android, head to your app store. Once downloaded, simply create an account and start your stable and let the fun begin. Play. Race. Win with StableDuel.