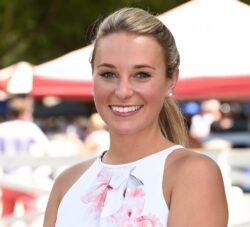 Gaudet grew up in a horse racing family as her parents, Linda and the late Eddie Gaudet, were trainers in the Mid-Atlantic region. She began her career as a racing analyst and paddock reporter for the Maryland Jockey Club in 2013 and from there went on to cover horse racing nationally at Arlington International Race Course the Breeders’ Cup and at Gulfstream Park. In 2016, she joined the New York Racing Association’s broadcast team as a racing analyst and reporter.

In 2019, Gaudet joined TVG on a year-round basis as an analyst and reporter covering premier racing including the Gulfstream Park Championship Meet, Keeneland and Churchill Downs. In addition to being part of the Keeneland team in April as co-host of “Today at Keeneland” and as paddock commentator, Gaudet expanded her responsibilities with the track to include U.S. sales representation and recruitment. Gaudet is married to trainer Norm Casse. Her sister, Lacey Gaudet, is also a trainer.

In addition to hosting, Eurton and Gaudet will also be honoured as part of the TVG team that won the Live Racing Programming media Eclipse Award for its coverage of Pacific Classic Day on Aug.17, 2019, at the Del Mar Thoroughbred Club.