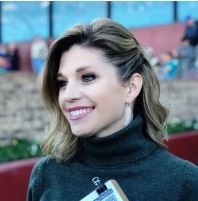 Holthus, the current paddock analyst at Oaklawn Park and Indiana Grand, has a wealth of experience in the industry, including walking hots, working in the racing office, and serving as stall manager at Hollywood Park. She works alongside her husband, trainer Paul Holthus, in the barns of their NPH Stables. Her Oaklawn selections are available on the track’s website.

Nancy Ury-Holthus is the paddock analyst at Oaklawn Park and Indiana Grand, and most mornings she can be found working in the barns of N P H Stables, the operation she and her husband, trainer Paul Holthus, own. She is the third generation in her family in Thoroughbred racing, but she was the first in her family to break away from the backside of the track and the first female. A Hot Springs, Ark., native, her earliest job in racing was walking hots (a term that means walking horses around the barn to help them cool down after exercise). She soon landed a position in the racing office, and from there, she has worked in a myriad of positions at racetracks around the country.

My introduction to horse racing occurred when … I grew up hearing stories from my dad. I was actually encouraged to do something else because being on the backside and being female and at a young age, especially 20 years ago, might not have been the best place. But being the very hard-headed youth that I was, I immediately went to the race track.

My top three favorite racetracks in order, and what I like about each one:

1. Oaklawn because it is the first track I ever set foot on.

2. Del Mar because I’ve had many a fun time there.

3. Hollywood Park. I spent the bulk of my adulthood so far on that backside as stall manager, and it was one of my favorite jobs and the most responsibility I’ve ever had. I learned a lot about myself in that position because you don’t see a lot of women in that role, especially since I was a lot younger. We had some really big names stabled back there from trainers Ron McAnally to Bob Baffert to Richard Mandella, and it was great to be around that level of horseman and that caliber of course.

My big break came when: While I was working at Hollywood Park, I started freelancing at TVG on nights or dark days, and that was a steppingstone for me to get my face more in the industry.

Favorite place at the racetrack to watch a race: from the backside. It’s a different place in the afternoons than it is in the mornings. It’s kind of quiet, you’re away from the crowds, and it’s almost like you’re in your own little zone.

Should the Breeders’ Cup rotate from coast to coast or have a permanent home: I like the rotation, but I liked it when it was old school, and it was all on one day. When it became two days, it got exorbitantly expensive to be a part of even as a fan, and it took away from it a little bit for me. I think one day of a phenomenal racing event made it that much more of a spectacular thing.

The most influential person in my career is: My parents. Since my dad was in the industry, he’s been a good motivator and sounding board, and my mom has been the rock of Gibraltar for me.

How did you meet your husband: I grew up knowing of the Holthus name. Paul’s dad, Bob [leading trainer at Oaklawn nine seasons], was a very well-respected horseman and gentleman. When I would come home to cover the races for TVG, I always made it a priority to interview Mr. Bob. I never knew Paul until after his father passed away. When I was home visiting from Southern California, I ran into Paul one night when I was out with some friends, and I said, “Holthus is looking pretty good!” So I approached him, and we exchanged numbers. I was still living full time in southern California. At the end of the Hollywood Park meet, I packed up my car and drove to Arkansas to spend the final two weeks of the race season, and I called Paul, and we have pretty much been together every day since then, and it’s been more than six years.

Best advice to someone considering ownership: The best way to do it is to get in a share with someone so you’re not 100 percent responsible financially. And don’t get into it unless you have that money to lose because there are no guarantees you will profit.

Accomplishment I am most proud of: Especially this past year, I’ve done a lot of charity work, emceeing events. And I’ve learned that I have a passion for it and I’m good at it. I’ve done quite a bit with the PDJF. It’s an amazing cause that I think more people should be involved with. I help emcee the Arkansas Racetrack Chaplaincy benefit. We also had an event for two long-time members of the Oaklawn racing office who had incurred a lot of medical expenses. I do think it’s extremely important to give back to those who give to us.

What is your go-to or signature bet to make at the racetrack: I am typically a win and place kind of girl. I’m traditional. I will throw in some rolling Pick 3s. Not all tracks have them, but I like them.

My biggest gambling score ever at the racetrack was: A Pick 3 at Keeneland that paid around $1,300. I’m not a big gambler, to tell you the truth. I know that’s kind of weird, but I’m a really bad loser.

Favorite international racing event: My bucket list is to go to Meydan to see the pageantry.

Other sports/teams I follow: I am a HUGE mixed martial arts fan. It’s almost an obsession. I became fairly involved in the sport and actually worked in the industry for a little bit doing some writing and also some on-air commentating. I worked for a web channel, interviewing fighters and trainers. I don’t miss a UFC.

Favorite non-Thoroughbred racing sports event I have attended: the Indianapolis 500.

My favorite athletes of all-time: My dad. He’s still a workout junkie and playing tennis at 82.

What book(s) I am reading or have recently read: I will very much put it out there; I am not a book reader. I don’t have the attention span.

Favorite magazines: I’m a big Time magazine reader. I also like a good Sports Illustrated. And People if I’m waiting for an appointment.

Hobbies away from Thoroughbred racing: Paul and I are big foodies. We love to eat above our means, and we like to cook a nice meal at home. We also enjoy checking out upscale flea markets and antique markets.

Favorite foods: I love sushi. I love a good spaghetti and meatball, but it is incredibly hard to find, unfortunately. I like brew pub food, like share plates.

Best racetrack food can be found at: Keeneland.

Favorite actor: I’m a big Tom Hardy fan, and I love me some Sandra Bullock.

Favorite TV shows: “Blue Bloods,” “Preacher” and “The Ultimate Fighter.” I’m all about anything on the Bravo channel. The Real Housewives of Anywhere.

Favorite musician/band: When I need that zen, I always listen to Adele. I love me some Andrea Botchelli. I love Linkin Park. And every once in a while, I’ll listen to some electronic dance music.

If you could pick walk-up music that would play when your horse(s) entered a winner’s circle, what song would you pick: Katy Perry’s Swish Swish.

Top 10 websites I visit daily: Facebook, Twitter, the Paulick Report, BloodHorse, the Daily Racing Form, Thoroughbred Daily News, the New York Post, the local Hot Springs paper and Indian Charlie, depending on the race meet. I will do the Twitter searches to see what’s happening.

Favorite animal other than a horse: My two doggies. I have an 11-year-old Chihuahua named Sancho and a 1½-year-old rescue dog named Roscoe.

Favorite top three fashion brands you prefer to wear: As long as it looks cute, I’ll wear it. I don’t care if it’s Target or Tori Burch.

Favorite month of the year: November because we are off that month.

I’d like to have dinner with the following three people inside racing: [Hall of Fame trainer] Ron McAnally. He’s an absolutely adorable man. [CEO and President of the New York Racing Association] Chris Kay. I would love to pick his brain on a few things. And for the third one I’m going to choose a jockey—Mike Smith. He’s an amazing rider with some Oaklawn ties, and he has some fantastic stories.

I’d like to have dinner with the following three people outside of racing: You gotta go Oprah. How do you not ask Oprah? Mark Zuckerberg. He seems like a pretty badass person. And the Dalai Lama because I need some enlightenment in my life.

My philosophy on life: My mantra is “suck it up, Ury.” It means put your big girl panties on and just go on.