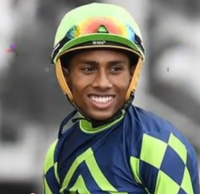 “Veronica Gizuk” thanks for the article

Almost three years later, jockey Romero Maragh considers himself lucky to be alive and riding again after his spill at Gulfstream Park on Jan 31, 2019. Maragh, an apprentice at the time, went down when his mount Classic Act clipped heels with Dixie Princess ridden by Paco Lopez.

Jockey Romero Maragh started the new year a winning one in the Limehouse Stakes at Gulfstream Park aboard Lightning Larry on Jan 1. With 2022 just beginning, Romero has set his goals and is working tirelessly to achieve them. “I’d like to win my first graded stakes and win at least 100 races this year,” said Maragh.

Q: Do you remember your accident?

R: Honestly, I remember up to the point where I was about to go down, and that was it. I was just knocked out immediately and woke up in the hospital; it felt like a dream/nightmare.

Q: How long were you in the hospital, and what injuries did you have?

R: I was in the hospital for a total of 7 days, I fell on Jan 31, did emergency surgery the morning of Feb 1, and I was released but very immobile on Feb 7 wearing a back brace that I had to keep on for two months. My exact injuries were five vertebrae (t-5 to t-9), broken ribs, punctured lungs, and a severe concussion.

Q: What was the hardest part of your recovery & in total, how long were you out?

R: I was out for an entire year without being on top of a horse, then I started getting on horses for two weeks then went back to racing. The hardest part about my injury was just not being able to ride; ever since I was a baby, all I’ve ever wanted to do was ride, and I was doing pretty well at the time riding a lot of really nice horses, including “Maximum Security”, and graded stakes-winning “A Bit Special” and to be out on the sideline and watch a lot of these horses win while I wasn’t able to ride them was a bit rough. In addition, I just wasn’t able to get on any horses at all throughout my injury, and riding is my passion, so it was horrible not to be able to do what I love most.

Q: Do you think your accident made you a better rider?

R: Honestly, it has in certain ways where I had to opportunity to go back and watch my replays while I was injured, to look and try and fix mistakes that I used to make

Q: Were you afraid or nervous for your first race back?

R: My first race back, I wasn’t afraid or nervous; I was honestly just overly excited. I just missed it so much

Q: What were your emotions like throughout your recovery & how did you remain positive?

R: My emotions were okay. I had a lot of family and friends around that kept me in a positive mindset, and realistically at that point, I considered myself lucky to be able to walk, so I just tried to look at my injury in a positive way and take the good out of the bad. The only rough part throughout my injury was what “could’ve been”, meaning all of the horses I was riding and big races they were winning, and I just wasn’t able to ride them, given how hard I worked to improve on my riding and to be able to get to ride those horses, and the injury took that away from me, but at the end of the day I always consider myself lucky because I’m able to ride again, so that was always the positive side

Q: What were some challenges you face faced getting ready to ride & how did you overcome them?

R: Well, a problem that I faced was that when I got hurt, I was immobile for two months, and I couldn’t work out at all for the first six months of my injury, so that made me gain weight, and that was a bit of a challenge that I faced, but it wasn’t that bad.At that point, it was just about working out and getting fit again; which I went to the gym about twice a day every day, rode the equicizer every day, and I had to do physical therapy three times a week; therefore, my schedule was very packed and heavily focused on coming back. Otherwise not many other challenges because my surgeon did a phenomenal job, and since my injury, I’ve felt zero pain in my spine.

Q: Was there ever a point you considered not riding again?

R: There was never a point that I considered stopping riding. I remember I fell on Jan 31, and I was named on “A Bit Special” in a grade 3 on Feb 3. So when I fell and woke up, I was on heavy medication; my doctor said emergency surgery was needed because I would’ve been paralyzed if I didn’t do the surgery, but he said we would’ve had to do the surgery the following morning on Feb 1, but I asked him if I was able to do surgery on that same night so I’d be able to ride A Bit Special in the stake in the next couple of days, and he said to me, “Buddy we have to do this surgery to make sure you can ever walk again.” When he said that, I was shocked, but it also felt like a dream. Even then, I didn’t doubt myself about riding again; once I did the surgery, I walked about two days later, with the help of a walker and a nurse, of course. Since I was able to walk, my main focus was to recover 100% and come back to riding. My surgeon asked me if I didn’t want to try a different profession, but riding was my only focus, which I made sure to recover fully 100% before I started getting on horses again.

Q: What’s a piece of advice you would give to a fellow rider recovering from injury?

R: A piece of advice that I would give is not to be negative and focus on the positives, and it will help your mindset, try to take the good out of the bad. To always take your time and make sure you’re fully recovered 100% before coming back so when you start riding again, you can give it 110%

Maragh, Romero: Born: April 14, 2000, From: Hollywood, FL
Maragh comes from a racing family. Cousins Tony and Rajiv are jockeys and he has uncles that are successful trainers. Started riding as soon as he was in old enough (in FL you have to be 18 to ride). Had a mount on his 18th birthday but it flipped in the paddock and was scratched. He had his first ride the next day and then broke his maiden on his 4th mount—a horse
for Chuck Simon. Maragh’s first stakes win cam on a Patrick Biancone trained horse and Romero credits Biancone. Jan. 31, 2019, Maragh went down in a racing accident (clipped heels), fracturing two vertebrae and was knocked unconscious for 30 minutes. Underwent an emergency 6 hour procedure to fuse 4 vertebrae, had a titanium rod inserted to stabilize his spine and was fitted with an upper-body brace that he had to wear for months. He did not get back to riding until early in 2020. Maragh grew up with the dream of becoming a jockey but was getting too big. He took up soccer at age 16 to get exercise—but he was good. He was playing at a high level and getting scouted by some top college and even some professional teams were looking at him. He was fitter now but he still weighed 150-155 lbs. He joined an elite soccer team called Next Level Soccer academy, they trained very hard, and within 2-3 months he was in the best shape he had ever been in and
weighed 120-125 lbs. That’s when she started going to the track and learning to ride thoroughbreds (Jan. 2018). Education was important to him though. He had a 4.4 GPA as a junior and more
credits than necessary to go another full year so he took some college-level AP courses and then was able to not have to go to classes that spring. He graduated with his class in June 2018.