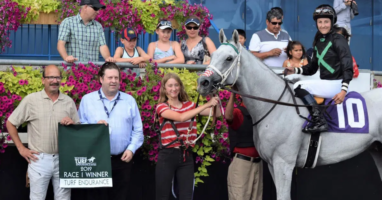 Determined to promote the sport by forming affordable syndicates, this enthusiastic racing family is committed to both hard work and having fun.

Horse racing is a team effort. Sometimes, it’s even a family affair.

Case in point: a family-run outfit known as Team Ezra.

Julia doesn’t hesitate when asked why she loves the racing game.

“It’s cool to work with them every day and you see them go over there, run and do well. Then cooling them out and grazing them and just to know when they accomplish something,” said Julia, who received her groom’s license four years ago.

Her hard work at the track has not gone unnoticed. Back in 2018, she received the award for Groom of the Year at Fort Erie Racetrack.

Julia’s dad, Daryl, has been a fixture on the racing season for over three decades. The versatile horseman is grateful that his family supports his love for the game.

Julia (left in orange) heads to the track for just the second time after getting her exercise rider’s license. (Photo courtesy Mike Mann & Laurie Langley)

“My wife [Michelle] works alongside every single day with us. We share duties with the horses. My other daughter [Amanda] and my two sons [Aaron, Kacey] ‒ it depends on the size of the stable and what they are doing, but they worked for me in different summers,” said Ezra.

The horse trainer admits the changing economic landscape has affected his stable size.

“At one time I had 25 horses and now I have five. The industry has changed, obviously, economically from 2012 when the slots at racetracks program evaporated and then the economics of the racing season from 188 days at Woodbine to 132 while maintaining the same purse structure.”

Working in horse racing for a long time, Ezra has also seen the industry from various vantage points. “My first license was ‘84 as a hot walker/groom. My first trainer’s license was ‘95 and I’ve been stabled at Fort Erie ever since.” Even if you haven’t seen him on the backstretch at the Fort, you’ve probably heard Ezra call races at various Ontario tracks.

In terms of his training career, Ezra has amassed over $5 million in career earnings, which includes over 300 lifetime wins. Last year the trainer captured the first leg of the Turf Endurance Series at Woodbine with Bold Rally.

Despite the changing economic tide, Team Ezra is still going strong and Julia’s non-stop enthusiasm for the sport continues to run deep.

“She always wants more horses. She spends a lot of time studying the racing form and watching the replays and looking up pedigrees,” Ezra said.

Studying aside, Julia is also kept busy jogging and galloping horses for her dad. One of those horses is a quirky fellow named Ratface MacDougall.

“He is an interesting horse. He likes to bite people. Some days he’s nice and he’s fun to get on. But if he hears a noise, he gets a little scared and that’s where his name comes from – Ratface – he kind of acts up a little bit. If you brush him he tries to attack you, but then if you have mints or carrots he has his ears up and he is digging at the front of his stall wanting you to give him attention until you run out of mints. Then he paws some more waiting for you to get some more.”

Destined to possibly follow in her father’s footsteps, Julia has even inspired Team Ezra to form a racing syndicate.

“Last year she pushed me to form a syndicate called Krazy 8 Stables. It mostly consisted of previous owners that had been out of the game, or friends who wanted to get involved. It was a successful syndicate for the year. We won five races. We had a lot of fun, broke even, which is a good thing. It’s tough to do in this sport,” said Ezra, who notes that encouraging more people to become involved in the industry is crucial to its survival.

However, Krazy 8 Stables is not simply a syndicate. Daryl explains that there is significant meaning behind Krazy 8 and the green silks that represent the owners.

“Kelsey Hill was the daughter of owners Lana and Derek Hill and she passed away at a young age, around 11, from brain cancer. They were always doing fundraisers for Kelsey. So the lime green is the colour for brain cancer. We took the K out of there for Kelsey. I thought it was something nice to do for them.”

Over the winter Julia encouraged her dad to form another syndicate.

“It’s out there, we’ve had over 25 people interested in it at $500 a share. That syndicate hasn’t got off the ground this year yet because of the instability and uncertainty of the industry right now [because of the COVID-19 pandemic]. The other syndicate is still active. They did keep two horses for this season. I didn’t want to get everyone involved ‒ you can just imagine the headaches and turmoil of trying to refund the money if we didn’t go forward. I wanted everybody to jumping in and getting to play right away, because after all, we do a lot for fun and hopefully at the end of the day we break even. If you show a little profit, fantastic.”

Regardless , Ezra remains wholeheartedly committed to the game.

“It’s a lifestyle, it’s a passion and it’s in your blood ‒ no question about it. The other three kids bring mints and apples and ask ‘can I come see the horses’ on most days when they are not helping out. Julia actually motivates me at times. She just loves everything about it. She is dressing up equipment and you will see some of the horses all braided up. She is always spending her own money and buying equipment just to make them look attractive. It’s in the blood and with her it’s an addiction.”