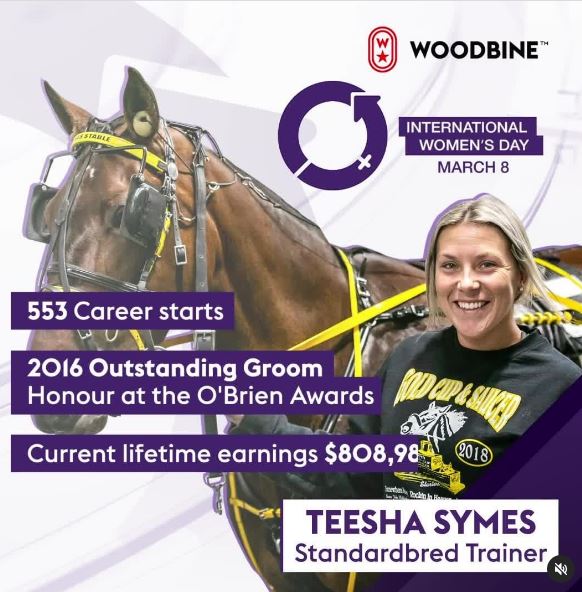 A lot of people don’t understand the hours and the time we spend here. ‘How do you do it?’ It’s like a high, you search for that high. Every time you get to the winner’s circle, you look for that next week.”

Third-generation horseperson Teesha Symes is no stranger to the racetrack and no stranger to success. Now in her third full season as a trainer, she’s on pace to surpass her totals from one year ago despite the drastically different circumstances the harness racing industry faced this year due to the coronavirus pandemic.

“I set a pretty low goal this year just because of COVID and stuff,” said Symes in a recent COSA TV interview. “I just wanted to surpass my numbers from last year. I think I’m one win away from surpassing wins and 40 or $50,000 shy of surpassing last year’s earnings.”

With one month to go in the 2020 season, Symes definitely has a chance to post career-best numbers in the wins and earnings columns. She’s currently managing a stable of 11 with eight racing and a few set to qualify.

Symes recounted spending summers in Prince Edward Island with her dad growing up, and her early exposure to Grand Circuit success with world champion pacer Shadow Play while working for Dr. Ian Moore.

“He’s taught me a lot; a great guy to have in my back pocket,” said Symes of Moore. “I talk to him three or four times a week. Any questions I have, he’s always on the horn to answer. Knowledgeable horseman, just a great guy.”

The opportunity Moore gave Symes to groom upper echelon horses the likes of Shadow Play and State Treasurer provided the award-winning caretaker with more education and connections than she could have hoped for, forging friendships that persist to this day.

“Working with the Grand Circuit horses with Ian was a game-changer. It opens your eyes to so many different things, you meet so many different people. I have friends from New Jersey, Pennsylvania, Illinois that I still talk to from the connections I made through horses like Shadow Play and State Treasurer.”

To watch the COSA TV full feature on Symes, click the play button below.