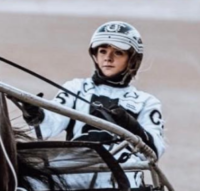 Dresden Raceway will roll out the red carpet for three-year-old pacing colts and geldings on Monday (Aug. 2), as the marquee division of the Ontario Sires Stakes program arrives in the Chatham-Kent region for a trio of $20,000 Grassroots divisions and two $7,000 Prospect Series splits.

Trainer Cassidy Schneider, who will start two colts in the Grassroots Series and one in the Prospect Series, looks forward to her first visit to the Dresden Raceway half-mile oval.

“It’s my first time racing in Dresden, so that should be interesting,” said Schneider, who is in just her second year of training. “I’m hoping for a good result. They didn’t draw terrible — they could have drawn worse, they could have drawn better — so I’m not disappointed in the draw. I hope they all get a cheque. Small ones, big ones, a cheque would still be a cheque.”

Beef N Cheddar returns to his roots to make his sophomore Grassroots debut. Owned and bred by Matthew Chapple of Chatham, Ont., the Betterthancheddar gelding will start from post four in the second $21,100 division and heads into the race off a 1:55 victory at Woodbine Mohawk Park on July 26.

“We didn’t think he could go in 1:49 in the Sires Stakes in Mohawk, so we kind of waited for the ‘B’ track ones. We really like him; he’s a pretty nice colt,” said Schneider, who hopes driver Alfie Carroll is able to put the gelding into the action early. “I know he win off the pace in Mohawk, but on the half he’s better near the front.”

The trainer’s second Grassroots starter is Hollys Treasure, who faces a tough test in the third $21,100 division, lining up at post two to the right of division co-leader Proline.

“He’s kind of a grit-grinder. It doesn’t really matter where he gets away because he can finish, he can leave, you can pull him first-up. You can kind of do whatever you want with him, but that looks like it’s a pretty tough race compared to what he’s been in,” said Schneider, whose father Colonel Schneider Jr. bred and owns the State Treasurer colt. “He’s a homebred, so he’s pretty special to us. And he’s been racing really good; he’s [won] a couple this year, took a new lifetime mark in Sarnia in 1:57. He’s been racing pretty consistently.”

The final member of the Schneider stable heading behind the gate is Smilingbillythekid, who will start from post five in the first $7,200 Prospect Series division. Alfie Carroll will guide the Betterthancheddar colt, who is making his second start under Schneider’s tutelage for owner-breeder William Brown and Brenda Derible of Hanover, Ont.

“I really like Smilingbillythekid; I think he’s going to turn out to be a nice horse,” said Schneider. “It’s only my second start with him, but I’m hoping things work in our favour on Monday.”

Monday’s program gets under way at 1 p.m. and the Grassroots colts will be featured in races three, six and seven while the Prospect Series battles take place in races five and eight.