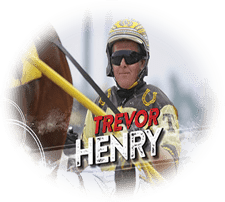 Trot Insider has learned that Trevor Henry will celebrate his birthday in style with a return to action this week at Woodbine Mohawk Park.

One of the top drivers in the nation, Henry, told Trot Insider that he’s looking forward to being back at the track and said he’ll don those familiar gold and brown colours at Mohawk on his birthday — Thursday, March 25.

The return to action comes after Henry took time away from the track since racing resumed in mid-February. He had days to serve for driving infractions, and he took extra time away to settle some personal matters relating to his family. His father, Ross, passed away just before Christmas, and his mother, Joyce, passed about five weeks later.

Henry’s last drives came in December 2020 as the harness racing industry paused due to the coronavirus pandemic. He had just surpassed the 7,000 win plateau earlier that month, and his career resume stands at 7,023 wins and more than $66 million in purse earnings. He was the regular driver for a pair of O’Brien Award winners, sophomore trotter Pemberton and older trotting mare Hey Livvy.