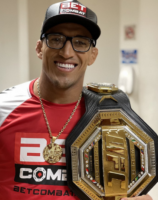 GUELPH, ON — Charles Oliveira, the reigning Lightweight Champion in the Ultimate Fighting Championship (UFC) has joined in the ownership of 2021 Matron champion Threepointbluechip.

The sophomore trotter is owned and conditioned by TheStable.ca in partnership with the colt’s breeder, Blue Chip Farms — which sponsored Oliveira’s match race against Tim Tetrick at Yonkers Raceway in July 2021.

Outside of training for UFC competition, Oliveira, 31, is actively involved in harness racing at home in Sao Paulo, Brazil. He was first introduced to the sport by a friend and has been credited with raising the profile of the sport in his home country.

Oliveira joins 30 other individuals who own shares in Threepointbluechip through TheStable.ca, the largest harness racing stable in Canada and one of the most robust fractional ownership operations in horse racing, with more than 900 clients from 13 countries.

Threepointbluechip’s 2021 rookie campaign kicked off in September when he eased into back-to-back wins at Woodbine-Mohawk Park shortly before his big test in the Breeders Crown eliminations at The Meadowlands where he was fourth. He was supplemented to the $179,200 Matron at Dover Downs where the gamble paid off in a decisive 4-1 victory in 1:55. The payday punched his ticket for the Valley Victory where he overcame a rough start to finish a solid fourth. Campaigned in Canada by Jason McGinnis and in the U.S. by Jim King Jr., he was piloted exclusively by Canada’s Driver Of The Year, James MacDonald.

The Walner colt is out of Dunk The Donato, named Trotting Broodmare Of The Year in the U.S. at the recent Dan Patch Awards.