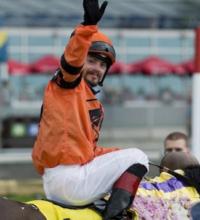 TORONTO – It’s been some time since veteran jockey Justin Stein could actually look forward to a full racing season at Woodbine Racetrack.

The global pandemic forced delayed starts in 2020 and 2021. On Saturday, Woodbine will open its first full racing season since 2019 with 133 dates scheduled through Dec. 11.

“I’m really excited to start,” Stein, who captured the ‘12 Queen’s Plate aboard Strait of Dover, said during a video conference Wednesday. “I feel like I’m mentally prepared for the longevity of the season we have here because it’s a grind.

“We’re going to be running two-and-a-half months longer than we have the last two years but all the jockeys I know are excited to ride. We do it because we love it, first and foremost.”

One of his victories came aboard filly Munnyfor Ro in the $500,000 Woodbine Oaks, the opening event of the Canadian Triple Tiara series.

Stein expects to have three or four mounts Saturday and is more than prepared for whatever conditions Mother Nature will present over the spring. The opening-day forecast is calling for a high of 8 C with an 80 per cent chance of rain.

“I’m a good Canadian, I know how to dress for the weather,” said Stein. “I just consider it another aspect of racing.

But jockeys aren’t the only ones looking forward to a full ‘22 season. So too are trainers Kevin Attard and Josie Carroll.

“The last couple years of the pandemic have caused a lot of chaos,” Attard said. “Even just trying to get the horses prepared and ready.

“This year, obviously, we have to deal with Mother Nature a little bit . . . but for the most part we’re all set and ready to go now.”

“The last two years we’ve come back with horses ready to run . . . only to find out our season has had a lengthy delay,” she said. “It’s been very, very hard to keep horses at their peak for two months before they could run.

“This year we’re coming back and we have our regular season. It just takes a lot of pressure off.”

Attard finished second among Woodbine trainers last year in earnings (over $3.56 million) and starts (340) and third in victories (55). One of his wins came via Munnyfor Ro in the Oaks.

Attard said the filly is currently in the U.S. and the plan is for her to make a start south of the border before returning to Woodbine.

“We’re obviously looking forward to getting her back up here,” Attard said. “She had a wonderful campaign last year.

“I’ve seen pictures and videos of her and she seems to have grown and filled out. There’s a lot of maturity that looks like it’s developed with her.”

The Queen’s Plate will kick off the Canadian Triple Crown, which will also include the $400,000 Prince of Wales Stakes (Sept. 13 at Fort Erie Racetrack) and $400,000 Breeders’ Stakes (Oct. 2 at Woodbine). Wando remains the last horse to win all three legs, accomplishing the feat in 2003.

The Queen’s Plate has traditionally been run earlier in the summer, but Attard likes the later start.

“With the Plate in late June or early July, if you weren’t winter-trained or even getting a start in the winter, then you were up against it,” he said. “This way, even if you have an unstarted three-year-old at this point that for whatever reason had some setbacks as a juvenile . . . you still have an opportunity now with an August start to make the Plate.”

“You love the history of the Plate and where it was placed all the years we did it,” she said. “But I’d have to say moving it later into the season, I think, benefits a lot of the Canadian horses that might be a little behind and couldn’t race over the winter.

“I think it gives opportunity to a lot more owners and trainers to run in it.”

Carroll, a member of the Canadian Horse Racing Hall of Fame, will open the season needing just six wins to reach 900 for her illustrious career.

“It seems like it’s gone by in the blink of an eye,” Carroll said. “I’ve been so fortunate to have so many nice hoses over the years that I just can’t believe I’ve been doing this for this long.”

This report by The Canadian Press was first published April 13, 2022.